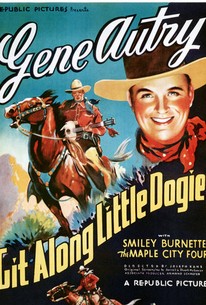 Gene Autry gets into a heated fight with an oil company in this very tuneful early entry in the Autry oeuvre, restored in 2001 under the auspices of "Gene Autry Entertainment. Gene, who believes the oil wells will pollute the grazing land, is feuding with broadcaster Doris Maxwell (Judith Allen), whose banker father (William Farnum) has embezzled $25,000 to fund a local drilling project. Our hero, however, changes his mind when news arrives of a railroad to be built if and when the well comes in. He also discovers that George Wilkins (Weldon Heyburn), the oil-drilling superintendent, has framed old man Maxwell and is now claiming the well to be dry in order to take over the operation himself. In addition to Harris Heyman and Snyde Miller's title tune and Jean Schwartz and William Jerome's "Chinatown My Chinatown, Git Along Little Dogie includes a sing-along of such standard melodies as "Red River Valley" and She'll Be Comin' Round the Mountain", complete with on-screen lyrics for audience participation.

The Cabin Kids
as Brown children

Will Ahern
as Himself

Horace B. Carpenter
as Clem

Grace Ahern
as Herself

Bobby Burns
as rancher
View All

There are no critic reviews yet for Git Along Little Dogies. Keep checking Rotten Tomatoes for updates!

There are no featured reviews for Git Along Little Dogies at this time.