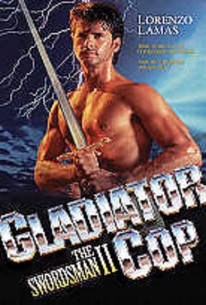 Blending action with a touch of sword and sorcery, this drama centers on the attempts of a brave cop to stop the Game, a brutal series of sword fights in which the one who survives the match is hailed the winner. To stop the fights, the cop goes undercover as "The Gladiator" and tries to stop them. But stopping the match becomes complicated when the crazy match promoter (and also champion fighter) decides to force the Gladiator to use the sword of Alexander the Great against his sword of Ghengis Khan as he is convinced he and the cop are the great warriors' reincarnations.

Louie Paquelle
as Thief 1
View All

There are no critic reviews yet for Gladiator Cop: The Swordsman II. Keep checking Rotten Tomatoes for updates!

There are no featured reviews for Gladiator Cop: The Swordsman II at this time.