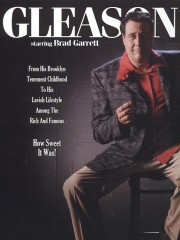 Charlie G
November 22, 2014
I know he made it big and is well remembered but I thought this was rather dull and long winded.

Thomas B
June 14, 2014
Good acting by Garrett. I really didn't think he could play jacky Gleason , but he does a good job. I didn't really like the way Gleason is portrayed as a dick head. But hey, he was known to be an asshole at times.

The television movie called Gleason was aired by CBS on 13 October 2002. I watched it eight years later here in Tasmania, Australia.1 The movie took a deeper look into Jackie Gleason's(1916-1987) life; it took liberties with some of the Gleason story; it featured his troubled home life, a side of Gleason that few would previously have known about. I knew nothing of it. Here in Australia he was not as well-known as in North America. Gleason had two daughters by his first wife. They divorced and Gleason endured a brief second marriage before finding a happy union with his third wife, Marilyn Taylor.

Jackie Gleason's first recognition as a significant entertainer came on Broadway when, at the age of 28, he appeared in the hit musical Follow the Girls(1944). I was born that same year in Hamilton Ontario. CBS wooed and won him over to its network in 1952. The year 1952-3 was a big year for my family. It was their first contact with the Baha?i Faith. Gleason took the role of a lead performer in the musical Take Me Along, which ran from 1959 to 1960; he won a Tony Award for Best Performance by a Leading Actor in a Musical. I joined the Baha?i Faith that same year at the age of 15.

In 1962, the year I began travelling and pioneering for the Canadian Baha?i community, Jackie resurrected his variety show with more splashiness and a new hook. The hook was a fictitious general-interest magazine called The American Scene Magazine through whose format Gleason trotted out many of his old characters in new scenarios. He also added another catchphrase to the American vernacular. It was first uttered in the 1963 film Papa's Delicate Condition: "How sweet it is!" The film was released in New York 7 weeks before what the sociologist Max Weber, in his sociology of religion, called the full institutionalization of a charismatic Force---in the Universal House of Justice.

On June 30, 1988, the Sunset Park Bus Depot in Brooklyn was renamed the Jackie Gleason Depot in honor of this native Brooklynite. I had just started teaching in Perth Western Australia in Technical and Further Education, my last full-time job, in one of the most isolated cities on the planet.-Ron Price with thanks to 1 WIN TV, 6 December 2010, 12:20-2:05 a.m.

My life has been so different than yours, Jackie.
It was a miracle you lasted until you were 71!!!
On five packs of cigarettes a day and all that OH
--all that booze and emotional ups-and downs,
all that egomania, all that narcissism, all those
damaged relationships!!! I did not do half as
bad, Jackie?..but then I did not become even
half as famous and never made all that money.
The perils, eh Jackie, of being famous and rich!

I did enjoy The Honeymooners,1happy memories
from a lifetime ago, before my mother decided to
sell our TV. You lasted a long time, Jackie, and I
had no idea what happened to you. You were just
a character on TV, an image, a simulacrum as Jean
Baudrillard calls the fascinating hyperreality of TV.2

1 The Honeymooners was a TV series that appeared from 1 October 1955 to 22 September 1956. I used to watch this program with my mother and father before they sold out TV which, they thought, was taking too much of my time away from my studies at school.
2 Jean Baudrillard(1929-2007) was a French sociologist, philosopher, cultural theorist, political commentator, and photographer. His work is frequently associated with postmodernism and post-structuralism which I leave to readers to follow-up on should they wish to read his books and essays about simulacra.

TonyPolito
August 16, 2010
Twenty minutes in, the viewer will barely realize he/she is watching Brad Garrett and not "The Great One" himself. Voice, gestures, facial expressions - it's all just amazingly spot-on.

Sadly this unique, talented delivery is wasted on a hack script that bypasses the majority of Gleason's accomplishments, backstory and distinctive persona.

A biopic of Gleason ought be interesting - and it is, at least, whenever Garrett is channeling Gleason. Garrett, seemingly effortlessly, grips Gleason's stage persona directly by the horns, tapping deep into factual shtick and comic material to revive classic Gleason characterizations from Ralph Kramden to Reginald Van Gleason III.

And Garrett does just as well recreating Gleason the man - his swagger, witty quips and confidence. The film bookends with snippits of Garrett/Gleason being interviewed as he looks back over his career - snippits actually culled from a famous "60 Minutes" interview.

Unfortunately, the scriptwriters had no sense of purpose, direction - or sense of Gleason - once forced to veer past Gleason's most iconic media content. They needlessly and excessively dwell on relative minutia such as the desertion of Gleason's father, marital squabbles, Jackie's fondness for taking a snort, and other such pulp.

Such dwelling misses the mark wide. Example: Nothing said of Gleason's actual composing of the trumpet-dominated theme songs for both "The Jackie Gleason Show" ("Melancholy Serenade") and "The Honeymoons" ("You're My Greatest Love"). Gleason penned forty albums of similar 1950ish lush mood-music instrumentals, selling 120 million copies, even though he could not read/write music. Rather, he dictated it all to a composer, one note at a time.

Another example: Nothing said of Gleason's stellar delivery as Minnesota Fats in "The Hustler" (1961).

RECOMMENDATION: Despite the poor writing, for the excellent portrayal by Garrett, well spent viewing.
Page 1 of 1