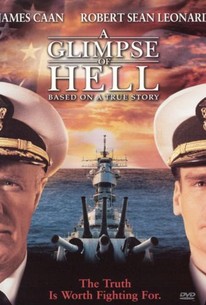 A Glimpse of Hell Photos

On April 19, 1989, an explosion during training exercises in Gun Turret number two of the U.S.S. Iowa, a storied battleship, created more than one firestorm; Besides the one that killed more than 40 sailors, a scandal swept the nation that put the U.S. Navy on the defensive. The Navy, in what some suspected was an attempt to cover up unauthorized artillery experiments by enlisted men, accused one of the dead men of being a suicidal homosexual and setting off the explosion in a fit of jealous rage. Idealistic Lieutenant Dan Meyer (Robert Sean Leonard), a witness to the tragedy, whose father was an honored military man, must square off with the ship's longtime, but remote captain, Fred Moosally (James Caan), when testifying during the heated and nationally televised investigation by the Pentagon.

Andy Smith
as Base Commander

Mark Day
as Fantaine
View All

Critic Reviews for A Glimpse of Hell

...proves that just because a movie's based on a true story, doesn't mean that it'll necessarily make for a compelling film.

A made-for-TV docudrama that breeds Edward Dmytryk's The Caine Mutiny with Rob Reiner's A Few Good Men, A Glimpse of Hell impresses only with its dedication to mediocrity.

There are no featured reviews for A Glimpse of Hell at this time.

A Glimpse of Hell Quotes