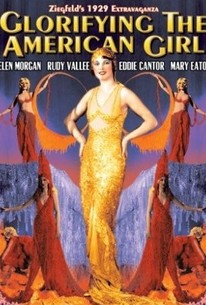 Broadway impresario Florenz Ziegfeld brought his legendary "Follies" to the silver screen in Glorifying the American Girl. The barely visible plotline concerns a virginal young miss (Mary Eaton) who aspires to greatness as a Follies girl. With stars in her eyes, she heads to New York, leaving her hometown boyfriend to fend for himself. Upon arriving in the Big Apple, our heroine links up with a two-bit dancer who offers to make her a star -- if only she'll let him make her, period. The greater part of the film is given over to a re-creation of a "typical" Follies production, replete with musical solos by Rudy Vallee and Helen Morgan and a sidesplitting comedy sketch with Eddie Cantor and Louis Sorin as a pair of kvetching Jewish tailors ("Vat's der idea uff calling me a damn fool in front uff der customers?" "So, it's a secret?"). From time to time, the camera cuts away to the many celebrities enjoying the show, including journalist Ring Lardner, nightclub doyenne Texas Guinan, New York mayor Jimmy Walker, Paramount Pictures head man Adolph Zukor, and Flo Ziegfeld himself, accompanied by his then-wife, Billie Burke. And yes, that's Johnny Weissmuller on-stage as a provocatively undraped "Nature Boy." As a bonus, the musical score was the handiwork of Irving Berlin. Originally filmed in Technicolor, Glorifying the American Girl is presently available only in black-and-white.

Helen Morgan
as Herself

Eddie Cantor
as Himself, performing in revue

Rudy Vallee
as Himself, performing in revue

Noah Beery Sr.
as Himself, arriving at theater

Billie Burke
as Herself

Texas Guinan
as Herself, arriving at theater

Adolph Zukor
as Himself, arriving at theater
View All

Florenz Ziegfeld, THE Broadway impresario, reluctantly nods to upstart Hollywood (at the time) a little in this, as there is some snippet of a story stringing the acts together, but for the most part this is a peek at the tradition of vaudeville and the work that the old-timers had to do to pull off entertaining the old audiences (pre-internet, maybe even pre-radio!). The emphasis, as Flo would have it and as is stated in the title, is the loving (some might say lecherous) gaze on the female form, and not much else. Women's Lib never heard of Flo Ziegfeld and vice versa. Largely seen as a trip back in time for interested viewers.