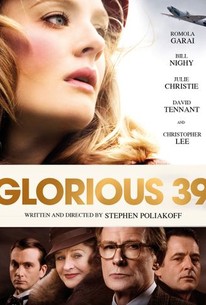 A woman makes a surprising discovery with dangerous consequences in this period suspense thriller, set in 1939. Anne Keyes (Romola Garai) is an attractive young woman who is enjoying modest success as a film actress; she's also the adopted daughter of Alexander Keyes (Bill Nighy), a career politician and member of Parliament. Anne still lives in the family home with her father, mother Maud (Jenny Agutter), budding diplomat brother Ralph (Eddie Redmayne) and socialite sister Celia (Juno Temple). One night, Hector (David Tennant), one of Alexander's friends, stops by for dinner and during a heated conversation makes no secret of his disapproval of prime minister Neville Chamberlain and his efforts to appease Adolph Hitler's Nazi regime. Another dinner guest, Balcombe (Jeremy Northam) doesn't care for what Hector has to say, and later that evening, Hector is found dead, an apparent suicide. Anne, however, begins to suspect foul play when she finds a set of phonograph records that document conversations of men discussing state intelligence secrets. When Anne ties to share this discovery with others, they're soon found dead, and she's no longer certain what she should do with these deadly secrets. Glorious 39 was an official selection at the 2009 Toronto International Film Festival. ~ Mark Deming, Rovi

Stupendous turn from Romola Garai in the lead role but, while this sets up intrigue and atmosphere well, the plot devices creak audibly towards the end.

For all its sumptuous production design, Steven Poliakoff's tale of glamorous toffs and treason is so laboured and slow that it's practically pensionable.

There's much to admire in the film, such as sequences of the often forgotten panic when family pets were systematically put down as war became inevitable, but there's quite a lot to argue about too.

Poliakoff's film has provocative ideas about appeasement and a few truly chilling sequences, but some surprisingly clumsy dialogue and occasionally awkward acting suggest he hasn't fully got a grip on his material.

But, when taken as a whole, [Stephen] Poliakoff's film is a watchable and involving thriller which effectively uses its setting to tell a menacing story of a family - and a country - being torn apart by an all-encompassing war.

Despite a few convincing turns, the feature is disappointingly winded, eventually going off on a few needless tangents that derail the whole production.

An enjoyable conspiracy thriller in the manner of John Frankenheimer's Seven Days in May.

Prestigious and serious-minded, but it's still nonsense.

Odd movie. I didn't really understand what the point of it all was..

A woman uncovers a conspiracy involving her adopting family during the start of the Second World War. It's always fun to watch Bill Nighy do anything; I'd probably pay to see a film of him reading the phone book, but even Nighy can't save this film. The plot is quite predictable, and some of the conflicts remind me of my complaints about A Room with a View - banal, upperclass issues made into plot points. Also, Romola Garai does not make for a convincing thriller protagonist. She doesn't seem clever enough to figure out the film's plot, and the moments when the film forces her to "be suspenseful" fail because she doesn't seem to raise the stakes of her performance. Overall, a bad performance by the lead combines to create a film that makes no sense as a thriller.

This movie demonstrates the lengths some will go in the name of "what's best" for the country (whatever that country may be). Well acted but the pace is way too slow! The end was such a large dose of cheese, I feel to could constipate many!

Set in beautiful surroundings this conspiracy thriller has many fine moments but is a little long winded which lessens the considerable tension it manages to build at points. All the performances are good the two standouts being Romola Garai in the lead and Julie Christie who plays an atypical role with silky malevolence.