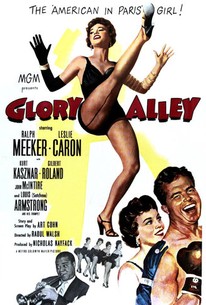 Authentic New Orleans locations enhance the overall enjoyment of the prizefight melodrama Glory Alley. A mere few seconds before a championship bout, Socks Barbarrosa (Ralph Meeker) decides to throw in the towel so far as his boxing career is concerned. Socks' friends, family and handlers assume that he's turned yellow. A series of complex flashbacks, coupled with a subsequent tour of duty in Korea, prove otherwise. For those not interested in cinematic pugilism, Glory Alley offers such sidelines pleasures as the jazz music of Jack Teagarden and the dancing of leading lady Leslie Caron. Kurt Kazner also provides some choice moments as a blind "boxing groupie" who happens to be Caron's father. ~ Hal Erickson, Rovi

Kurt Kasznar
as The Judge

Jack Teagarden
as Himself

David McMahon
as Frank, the Policeman

There are no critic reviews yet for Glory Alley. Keep checking Rotten Tomatoes for updates!

There are no featured reviews for Glory Alley at this time.