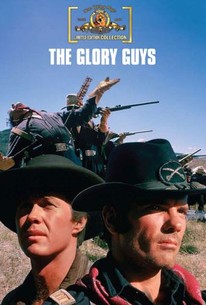 Boasting excellent battle scenes and redeeming cinematography from the veteran Howe, this movie is still hackneyed and bolstered more by the supporting cast than its stars. The story of a general whose political aspirations by far outstrip his humanity, it is mainly the tale of a general willing to risk the lives of others to enhance his own. Supporting cast in the form of James Caan and Slim Pickens keep the uninspired movie breathing as we watch, once again, a war-hardened soldier forced to take raw recruits into battle at the behest of a military tyrant.

Critic Reviews for The Glory Guys

The result's hardly a masterpiece, but it builds to a nicely mounted battle that pushes the point home.

Fitfully entertaining yet consistently unexceptional Western with a script by no less than Sam Peckinpah.

The bloody climax will awaken those who might have snoozed off.

Though the direction is uninspired, the film is greatly enhanced by the photography of veteran cameraman Howe.

There are no featured reviews for The Glory Guys at this time.