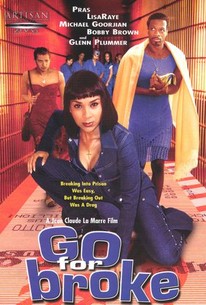 Jean Claude La Marre directs the urban comedy Go for Broke. Two guys win the New York lottery, then get held up by a robber at a cafe. The woman robbing the place gets caught, taking their winning lottery ticket with her to prison. In order to get the stolen ticket back, the two guys dress in drag to infiltrate a women's prison. Starring Pras, Michael A. Goorjian, and Marjorie Jean. Go for Broke was shown at the Urbanworld Film Festival.

Michael A. Goorjian
as Rome/Romie

Critic Reviews for Go for Broke

Maybe if director Jean Claude La Marre had spent less time winking at the camera and more developing a sense of story and style, it wouldn't have been quite as awful.

Audience Reviews for Go for Broke

There are no featured audience reviews yet. Click the link below to see what others say about Go for Broke!