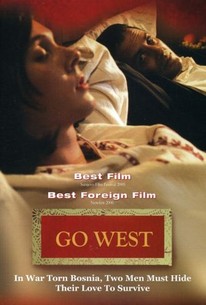 Kenan is a classical musician and a Muslim. His male lover, Milan, is a Bosnian Serb. Given the prejudice against homosexuals in the Balkans, they keep their relationship secret, and when war breaks out in 1992, they decide to leave besieged Sarajevo once and for all. While fleeing, Kenan is stopped by Serbian militiamen, to save him Milan disguises him as his wife. As they head for Milan's village in Eastern Bosnia, Milan is forced to join the army, and Kenan is left to fend for himself in this hostile land while still in his female disguise.

...an odd kind of gender comedy.

There are no featured audience reviews yet. Click the link below to see what others say about Go West!