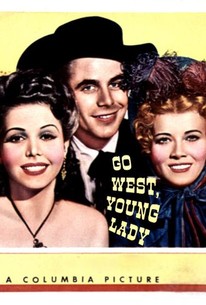 Taking a vacation from her "Blondie" movies, Penny Singleton plays an Eastern girl who follows Horace Greeley's advice and heads westward. She arrives in a flea-bitten frontier town where Marshal Glenn Ford is trying to rid the community of the vicious Pecos Pete. Singleton vies with saloon gal Ann Miller over Glenn Ford's affections, and along the way both actresses perform a few musical numbers. In the end, Singleton helps Ford lasso the villain. Go West, Young Lady takes great pains to avoid originality, especially in a knock-down, drag-out fight scene between Penny Singleton and Ann Miller which was clearly inspired by the Marlene Dietrich-Una Merkel battle in Destry Rides Again (39).

Jay Johnson
as Foursome
View All

There are no critic reviews yet for Go West, Young Lady. Keep checking Rotten Tomatoes for updates!

Minor western comedy is still a pleasant view. Much more of a showcase for Penny Singleton than a just starting out Glenn Ford but all three leads are pert.