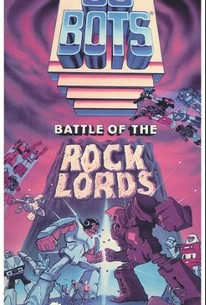 This fast-paced, animated action feature zoomed into theaters with characters developed from a popular TV cartoon series. The GoBots can morph into mechanical contrivances like land rovers or spaceships and are divided between good GoBots and evil ones (called Renegades). As these two factions combat each other, the Rock People have their own problems. They are humans who can become literally petrified if danger approaches. In their boulder form, it's no problem at all to roll down a mountainside and get away from pursuers. But the evil Rock Lords are oppressing the poor Rock People, and it's high time the GoBots rolled in to do something about it. ~ Eleanor Mannikka, Rovi

News & Interviews for Gobots - Battle of the Rock Lords

Yes, Apparently the World Does Need a "Voltron" Movie

View All Gobots - Battle of the Rock Lords News

Critic Reviews for Gobots - Battle of the Rock Lords

Save your pennies and watch the GoBots on TV instead.

What the story lacks in depth it makes up for with exciting combat scenes, and with a tendency to make women characters more than stereotypes in constant need of rescuing.

Unfortunately, the story, script, voice actors and animation all prove less flexible than the toys, and the film never turns into entertainment. GoBots are more fun to play with than they are to watch.

True to Saturday-morning cartoon tradition, 'GoBots' is a jerky, semi coherent series of chases, laser-gun battles and explosions, with an allegorical plot about how no one can handle too much power.

As poorly animated features go, this one ranks down there with the worst of them.

There are no featured reviews for Gobots - Battle of the Rock Lords at this time.