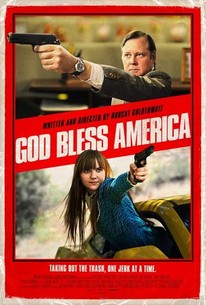 Critics Consensus: A darkly comic polemic on modern culture, God Bless America is uneven and somewhat this but the ideas behind this revenge fulfillment journey has primal appeal.

Critics Consensus: A darkly comic polemic on modern culture, God Bless America is uneven and somewhat this but the ideas behind this revenge fulfillment journey has primal appeal.

Critic Consensus: A darkly comic polemic on modern culture, God Bless America is uneven and somewhat this but the ideas behind this revenge fulfillment journey has primal appeal.

Frank (Joel Murray) has had enough of the downward spiral of American culture. Divorced, recently fired, and possibly terminally ill, Frank truly has nothing left to live for. But instead of taking his own life, he buys a gun and decides to take out his frustration on the cruelest, stupidest, most intolerant people he can imagine -- starting with some particularly odious reality television stars. Frank finds an unusual accomplice in a high-school student named Roxy (Tara Lynne Barr), who shares his sense of rage and disenfranchisement. Together they embark on a nationwide assault on our country's most irritating celebrities. -- (C) Magnet Releasing

Gilland Jones
as Girl Who Gets Shot in Movie Theater

Naomi Glick
as Girl Who Doesn't Get Shot in Movie Theater

Carson Aune
as Boy Who Gets Shot in Movie Theater #2

Toby Huss
as Man with Cell Phone Who Gets Shot

Christopher Doyle
as America Superstarz Security Guard Who Gets Shot

Lon Gowan
as Audience Member Who Runs and Doesn't Get Shot

Daniel Everson
as Audience Member Who Runs and Gets Shot

If you can take that premise, I think you'll go along with the film and it's really, in its very weird way, quite funny.

Gory, unfunny satire that deserves a prize for the most strained provocation of the year.

Murray and Barr make for winning platonic chemistry even when Frank suspects himself of impure thoughts. Goldthwait holds his nerve as the film shifts from ennui to malevolent gleefulness.

The satire feels hand-me-down and weak, and Goldthwait is firing blanks.

The new film's fire-power is too sloppy, too wide-spread; it barely scathes even the easy target of an American television talent show complete with Simon Cowell clone.

Goldthwait shows a knack for pin-pointing the sulphurous hues within the kaleidoscopic rainbow of alienation and frustration, but has sadly failed to paint any of them black.

For many of us, this garbage is getting old, and with God Bless America, Goldthwait has allowed us a cathartic outpouring of violence that offers a brief stopgap for our current sensory oppression.

What fundamentally didn't work for me was that all of the wit, humorous rants, and social commentary felt like they were aimed squarely at pop culture.

God Bless America has its crooked heart in the right place; too bad it's so inept it can't do anything about it.

If you're one of those few people who leave the cinema smiling after enjoying every last minute of mundane murder, what kind of monster does that make you? For even hinting at such philosophical conundrums, God Bless America is essential viewing.

It's simply a rant stretched over an extended running time, lacking in characterisations, direction and audience repayment - aside from a few mild chuckles.

While Goldthwait's heart is in the right place, it's unlikely the blood spilled in his film will make annoying, loathsome people finally straighten ... up.

Really...let's glamorize people that want to shoot other people for annoying them. Wonderful...

Upon hearing he has an inoperable brain tumor, mild-mannered Frank goes on a killing spree targeting reality TV stars, conservative talk show hosts, and others whom he sees as representing the worst of American mean-spiritedness; he's joined in his project by an outcast teen girl. Bobcat Goldthwait's angry but preachy black comedy is sort of an aging hipster version of Joel Shumaker's FALLING DOWN, but with zero subtlety. Frank doesn't speak in sentences, he speaks in editorials.

This is definitely a film that will divide people immediately, because between the satire and the black comedy, the violence and obvious lamentation of the lost American Way, director and writer Bobcat Goldthwait has a lot to say. Also none of it is positive. Maybe twenty years ago, but not now, not when there are so many differentiations and categories of annoying people doing annoying things in the world today. Picking each of these inane people off the face of that world turns into a revenge fantasy for main character Frank (Murray) and sidekick Roxy (Barr). Struck with the realization that his migraines are being caused by a giant death giving tumor, Frank begins a siege on the country by killing off all manner of horrible people, a teenager at his side, who may not be the best companion but has the same hate that fuels him. The satire isn't anything new, as we've seen in films such as "Idiocracy," but it's finely crafted here and takes its time rather than going for the worst scenario possible. What really triggers people's opinion of this film are the great monologues given by Frank on how exactly these people are playing into stereotypes, their false idyllic thoughts of the world, and their own annoying habits. They pick off religious zealots, singing competition judges, loud neighbors, reality starlets, and hate mongering television pundits, and these people are not dealt with for hateful reasons. Frank simply wants to know why people are so mean, stupid, or acidic when they could act better to one another and towards the world. Though the point is brought about thanks to gunfire, the film has an obviously positive point towards peace and understanding in the world, and the employment of common sense. It may be over the top, but it's an important, and very funny, film.