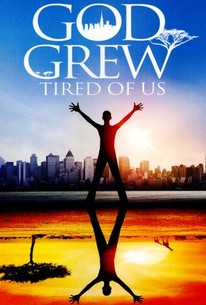 Critics Consensus: Not just a powerful telling of the journey of exiled Sudanese boys, God Grew Tired of Us is also a poignant account of the determination of the human spirit.

Critics Consensus: Not just a powerful telling of the journey of exiled Sudanese boys, God Grew Tired of Us is also a poignant account of the determination of the human spirit.

Critic Consensus: Not just a powerful telling of the journey of exiled Sudanese boys, God Grew Tired of Us is also a poignant account of the determination of the human spirit.

God Grew Tired Of Us Photos

Three young men leave behind a land in chaos to find new lives in a thoroughly different culture in this documentary. As the African nation of Sudan fell into political disarray near the dawn of the 21st century, with unspeakable violence following in its wake, thousands of refugees attempted to flee the country, making their way into Kenya in hopes of earning passage elsewhere. Jon Bul Dau, Daniel Abu Pach, and Panther Bior were three such people who eventually came to the United States, and filmmaker Christopher Quinn spent four years following them on their journey in a new and unfamiliar land. In God Grew Tired of Us, Quinn documents the young men as they struggle to build new lives for themselves, acquaint themselves with the "American" way of doing things, the difficulties of being black in a primarily white culture, and try to track down the friends and family they were forced to leave behind. God Grew Tired of Us received its North American premier at the 2006 Sundance Film Festival; actor Brad Pitt served as the film's executive producer.

News & Interviews for God Grew Tired Of Us

View All God Grew Tired Of Us News

Critic Reviews for God Grew Tired Of Us

Too often with documentaries, we get only the tears. There is no second act or resolution. Christopher Quinn's God Grew Tired of Us gives us reason to hope about a human catastrophe.

Not as good, nor as complex, as The Lost Boys, but that doesn't make the story of mass annihilation, sprawling refugee camps, the generosity of Americans, and the resilience of a handful of Sudanese survivors any less worthy of telling -- again.

There's no way to not like [John] Dau. Or for that matter, God Grew Tired of Us.

Their journey isn't over -- many in Africa still desperately need help -- but the hope and opportunities America offers are a grand place to start.

Can there really be no footage of their uncertainty, anger at unfriendly Americans, even an embrace of bad habits?

Admittedly amusing fish-out-of-water moments are nothing compared to what the boys face as they try to adapt to a wildly foreign culture.

It's an uplifting last act, though not one that comes with solutions to an Africa that seems to cough up one genocide after another. Personal redemption and hope aren't a cure-all, but they do shine a light in the darkness.

The Lost Boys' gratitude for simple things will humble those of us accustomed to comfort and opportunity. Their endurance, ambition, and compassion should inspire us.

A thought-provoking film likely to make moviegoers question their own paths in life even as it involves them in the lives of several of the 'Lost Boys' of Sudan...

God Grew Tired of Us is a better film than Lost Boys of Sudan, focusing on details of the men's lives and shifting fluidly between three distinct "characters": John, Daniel and Panther.

The film's subjects display impressive adaptability, as well as a desire not to forget those they've left behind. The emotional high point is a miraculous reunion between one of the 'Lost Boys' and the mother he'd had no contact with for 17 years.

Audience Reviews for God Grew Tired Of Us

Sudanese refugees adjust to life in America in this documentary. What was most interesting to me was how starkly this film depicts Maslow's hierarchy of needs. After the "Lost Boys" move to America, out of the squalid camp they grew up in, they quickly ascended Maslow's hierarchy, first craving the basic necessities until the lack of community and Americans' isolationist tendencies becomes too much to handle. The film also depicts genuinely good people. They are hard-working and loving individuals. Such stories are nice in a landscape of anti-heroes. Overall, God Grew Tired of Us is a nice film about a rise from the worst situation to one that is good but imperfect.

Engaging and insightful look in to our culture from people who have only the tiniest possible inkling of what they might be getting into.

the so-called 'lost boys' were forced to flee their homes in southern sudan under sentence of death during the civil war there. after seeing their relatives killed and their friends die, after 10 years of wandering and refugee camps, some were relocated to the united states. this is the story of the immigrant experience of people who had never even seen electricity. fascinating stuff

A Great Film, Having spent most of my life outside the United States, I could somwhat relate to how these guys felt. I remember having been outside the US for 9 years and coming back and going to a grocery store (Publix) and seeing all the choices. To many people here in the Us don't know what it is to do without. Can you imagine anyone in the US walking a 1000 miles, children and women. I don't think so. See this one please.

God Grew Tired Of Us Quotes