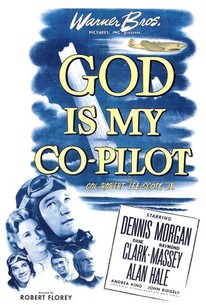 A rousing wartime drama, based on the autobiography of Col. Robert Lee Scott, Jr., a decorated Flying Tiger fighter pilot. Colonel Scott was operating cargo planes over the Himalayan Hump. He dreamed of serving his country more directly, but was originally told he was too old. Scott eventually convinced a superior to allow him and his Flying Tigers to fly combat missions to assist the Chinese against Japan. Dennis Morgan stars as the unlikely hero, but the show is stolen by Raymond Massey as Major General Chennault. The supporting cast is filled with notable character actors including Richard Loo as Scott's nemesis, Tokyo Joe. The film is filled with philosophical questions about fate and survival during war and what role faith plays. In its original release in 1943, some gory sequences passed through the Production Code because the violence shown is all against the Japanese, America's enemy.

Clark 'Buddy' Burroughs
as Scott as a Boy

Critic Reviews for God Is My Co-Pilot

The picture is not as bad, I must admit, as I'm making it sound; but it is not good enough to make me feel particularly sorry about that.

Well acted inspirational tale about a guy who fought and won a discrimination case against age in WWII, but the spiritual and religious aspects lack credibility.

This is not a film for non-believers.

There are no featured reviews for God Is My Co-Pilot at this time.

God Is My Co-Pilot Quotes