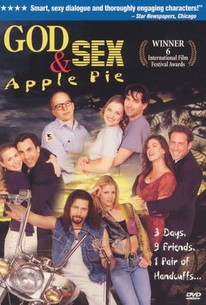 Television director Paul Leaf made his feature debut with this independent comedy about the intertwining sex lives of several adults on vacation. God, Sex & Apple Pie finds a stockbroker, a TV reporter, a model, and their six friends heading off for some rest and relaxation, but getting much more than they bargained for. Starring Greg Wrangler and Penelope Crabtree, the film won accolades from such film festivals as the Atlantic City Film Festival and the Arizona International Film Festival.

Don Ridley
as Fisherman
View All

There's not much for the viewer to do during God, Sex & Apple Pie except check off the obligatory plot points.

It does have some sex, some apple pie and some God, but it's more often in the verbal or implication, even the apple pie, if you let it be a symbol of growing up in America.

so derivative it's hard to get past its knockoff status

Takes the "Secaucus 7" / "Big Chill" formula and does nothing interesting with it.

Well-written and surprisingly well-acted by a relatively inexperienced cast.

Treads too-familiar ground, especially for anyone who has seen Return of the Secaucus 7, The Big Chill or this year's The Anniversary Party.

There are no featured audience reviews yet. Click the link below to see what others say about God, Sex & Apple Pie!