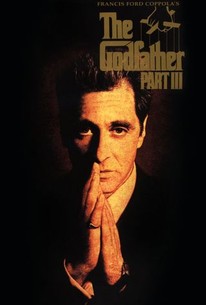 Critics Consensus: The final installment of The Godfather saga recalls its predecessors' power when it's strictly business, but underwhelming performances and confused tonality brings less closure to the Corleone story.

Critics Consensus: The final installment of The Godfather saga recalls its predecessors' power when it's strictly business, but underwhelming performances and confused tonality brings less closure to the Corleone story.

Critic Consensus: The final installment of The Godfather saga recalls its predecessors' power when it's strictly business, but underwhelming performances and confused tonality brings less closure to the Corleone story.

After a break of more than 15 years, director Francis Ford Coppola and writer Mario Puzo returned to the well for this third and final story of the fictional Corleone crime family. Two decades have passed, and crime kingpin Michael Corleone (Al Pacino), now divorced from his wife Kay (Diane Keaton), has nearly succeeded in keeping his promise that his family would one day be "completely legitimate." A philanthropist devoted to public service, Michael is in the news as the recipient of a special award from the Pope for his good works, a controversial move given his checkered past. Determined to buy redemption, Michael and his lawyer B.J. (George Hamilton) are working on a complicated but legal deal to bail the Vatican out of looming financial troubles that will ultimately reap billions and put Michael on the world stage as a major financial player. However, trouble looms in several forms: The press is hostile to his intentions. Michael is in failing health and suffers a mild diabetic stroke. Stylish mob underling Joey Zaza (Joe Mantegna) is muscling into the Corleone turf. "The Commission" of Mafia families, represented by patriarch Altobello (Eli Wallach) doesn't want to let their cash cow Corleone out of the Mafia, though he has made a generous financial offer in exchange for his release from la cosa nostra. And then there's Vincent Mancini (Andy Garcia), the illegitimate and equally temperamental son of Michael's long-dead brother Sonny. Vincent desperately wants in to the family (both literally and figuratively), and at the urging of his sister Connie (Talia Shire), Michael welcomes the young man and allows him to adopt the Corleone name. However, a flirtatious attraction between Vincent and his cousin, Michael's naïve daughter Mary (Sofia Coppola) develops, and threatens to develop into a full-fledged romance and undo the godfather's future plans.

Gabriele Torrei
as Enzo the Baker

Anthony Guidera
as Anthony, the Bodyguard

Frank Tarsia
as Frankie, the Bodyguard

Diane Agostini
as Woman with Child at Street Fair

[...] a crushing disappointment. It's a sluggish movie with nothing to say about the moral rot of the powerful that the first two parts didn't say much better [...]

The film is a slow fuse with a big bang -- one that echoes through every family whose own tragedy is an aching for things past and loved ones lost.

The movie, a heady thicket of political intrigue and double crosses, is slower, talkier, and more prosaic than the first two films, and its narrative seams sometimes show. And yet it's more than the sum of its mazelike convolutions.

Represents a certain moral improvement over its predecessors by refusing to celebrate and condemn violence and duplicity in the same breath, or at least to the same degree.

Sofia Coppola, making a horrendous leading-role debut, is perhaps the single most significant reason why this film was not nearly as well received as the previous two entries.

That The Godfather, Part III works up any grandeur at all is a tribute to the luridly baroque plotting of Coppola and Mario Puzo and the fierce and apparently ineradicable residue of artistic honor still left inside Coppola.

The movie has received an unfair amount of at times very petty criticism for the unspeakable crime of being a worse film two of the most highly-regarded American films ever made.

The third (and final) chapter of Coppola's epic crima saga is the weakest in terms of narrative and acting, but it still has artistic merits.

The third and final Godfather saga; not for kids.

After a break of more than 15 years, Francis Ford Coppola and Mario Puzo reunited for this: the long overdue final chapter of the saga of the Corleone crime family. And yes, while I agree that this is the weakest of the trilogy, it's not a bad movie, and not nearly as awful as everyone regards it as being. Do I wish it were better? Of course. Do I understand why this didn't match the others? Maybe. I mean, so much time passed between films that maybe it was inevitable that they'd hit a pot hole and stumble eventually. Saying that it sucks because third films have a reputation of being isn't a good excuse. I'm just happy that we finally got a conclusion, and that, despite the flaws, it wasn't worse. The plot mixes together an aging and bitter Michael reflecting on his life, trying to finally go legitimate in the face of an oncoming mob war with fictionalized portrayals of the death of Pope John Paul I and the Vatican Banking Scandal of the early 80s. To call this ambitious is a major understatement. I do like that it tried to weave in real events, especially ones that are so fascinating. The soap operaish elements are good to, but also where the problems are, mainly the oft-mentioned casting of Coppola's daughter Sofia (before she became a director) as Michael's daughter, and the rather underwhelming way things pan out. I do think the ending is rather fitting given the big picture, though. Sofia herself admits she's a terrible actress, and was only there because Winona Ryder was unavailable. The character, I think, was supposed to be awkward, and that Coppola's performance just happened to be so wooden and uninspired because her dad and Puzo were in a rut and couldn't think of a way to do it better. At least Keaton and Pacino elevate things. It's also good seeing Garcia appear in an interesting call back to the first film. The production values, cinematography, etc are top notch. This is a grand epic on a grand scale. Yeah, the writing (in some areas) is troubled, but I applaud the ambitiousness. The film has problems, but I refuse to call it a bad film, because, in all honesty, it really could have been far worse.

The Godfather Part 3 is the final and the weakest in the Godfather trilogy, but I am not saying it was not bad at all, in fact it was a beautiful conclusion and I loved it. The story now follows Michael as an old man, and he must deal with his life that is soon coming to an end. The plot is much more complex and great than I make it sound, it was incredible how even after all these years Francis Ford Coppola was still able to create a genius conclusion the Corleone story that exceeded my expectations in almost every way, and I can honestly say the ending made me tear up a bit. The cast is just as good now as they were back then, Al Pacino and Diane Keaton were great, and Andy Garcia was a great addition I think, he really helped the story. The score makes you think back on all the wonderful moments in the past films, I just always love the score in these movies. The Godfather Part 3 had one fatal flaw, it didn't include anything to do with Vito Corleone, they could've added something to add his story some more like the second film did, but other than that this is one of the greatest threequels ever made, possible #2 (#1 being Toy Story 3), but anyways, I loved the final installment, and I honestly don.t understand all the negativity from critics, oh well, I guess they made them a offer they couldn't refuse.

A descent movie, but this is minor league compared to the first two.