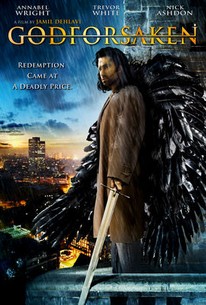 A nameless fallen angel descends to Earth seeking redemption for the death of a young innocent who perished while under his protection in this supernatural thriller from writer/producer/director Jamil Dehlavi. Sixteen years ago, the angel appeared on Earth. His mission was to protect a child, but he failed. Now the angel is back. He's taken human form, but the wounds on his back betray his appearance. As Lucille prepares to confess to a priest, it soon becomes apparent that the angel may be nothing more than a personification of a grieving mother's all-consuming madness. ~ Jason Buchanan, Rovi

There are no critic reviews yet for Godforsaken. Keep checking Rotten Tomatoes for updates!

There are no featured audience reviews yet. Click the link below to see what others say about Godforsaken!