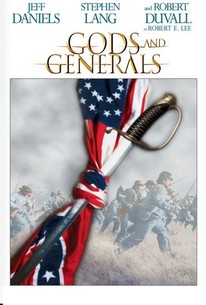 Critics Consensus: Filled with two-dimensional characters and pompous self-righteousness, Gods and Generals is a long, tedious sit. Some may also take offense at the pro-Confederate slant.

Critics Consensus: Filled with two-dimensional characters and pompous self-righteousness, Gods and Generals is a long, tedious sit. Some may also take offense at the pro-Confederate slant.

Critic Consensus: Filled with two-dimensional characters and pompous self-righteousness, Gods and Generals is a long, tedious sit. Some may also take offense at the pro-Confederate slant.

Director Ron Maxwell and producer Ted Turner return to the glory and tragedy of the Civil War in this historical drama, a prequel to Gettysburg, which examines the early days of the conflict through the experiences of three men. Col. Joshua Lawrence Chamberlain (Jeff Daniels) left behind a quiet life and a career as a college professor to become one of the Union's greatest military minds. Gen. Thomas "Stonewall" Jackson (Stephen Lang) was, like Chamberlain, a man of great religious faith who served in the defense of the Confederacy. And Gen. Robert E. Lee (Robert Duvall), who led the Confederate army, was a man who was forced to choose between his loyalty to the United States and his love of the Southern states where he was born and raised. As Chamberlain, Jackson, and Lee are followed through the declaration of war and the battles at Manassas, Antietam, Frederickburg, and Chancellorsville, the film also introduces us to the many supporting players in the epic tale of the war between the States, among them the women these men left behind, among them Fanny Chamberlain (Mira Sorvino) and Anna Jackson (Kali Rocha). Based on a novel by Jeff Shaara, Gods and Generals also features a new song written and performed by Bob Dylan. ~ Mark Deming, Rovi

Ben Hulan
as A Lieutenant

James Thomas Lawler
as Another Looter

Terry McCrea
as A Captain

Ted Rebich
as Looter No. 3

Christopher Crutchfield Walker
as A Looter

Critic Reviews for Gods and Generals

Everybody is so good and decent that it's hard to tell where the generals leave off and the gods start.

Maxwell continues his textbook emphasis on military maneuvers, but despite literally thousands of Civil War reenactors recruited for the film, the wide-screen canvas fails to map the tactics or evoke the terror of battle.

Every shot is fired in sorrow, and there are no villains - except, of course, for the politicians, who remain safely out of the frame.

Succumbs to turgidity. And...intentionally or not...conveys the impression that the film uncritically celebrates the Confederacy. [Blu-ray]

A labour of love with special interest to history buffs, this epic film is extraordinary in many ways.

Then there is 'Gods and Generals,' cut from the same production cloth as 'Gettysburg' but a film of very loose ends.

You will watch a series of battle re-enactments and wait for a film to break out.

Thinks it is grand without ever being so.

Imagine watching half of Band of Brothers in one sitting, but with the story moving at a much slower pace.

Audience Reviews for Gods and Generals

I sat throw the long nearly 6 hour cut of the film drinking Tea and by the end i only asked "WERE THE FUCK DID MY DAY GO?". Gods and Generals is a dry hollow epic thats boring and has woodern acting and camerea work thats nothing short of standered. Some nice music but thats it this movie is crap lol

I do have a problem with this one. IT SUCKS. One of the most boring films in the history of bad boring films.

This movie didnt do so well in theaters and I've even heard rumors that they are not making the last movie too the supposed too have been trilogy , "Last Full Measure", because of the outcome of this one. I'm not sure why? I would give this movie credit as being possibly the best Civil War movie ever made! It nails all the historical figures, the battles are awesome, and beyond that it has enough information about everyone too seriously keep your attention on the people - really want too keep watching, too see what happens, too see how they react. I think most Civil War movies lack that, and I rarley reccommend a movie about the Civil War too someone who is not a Civil War buff. This one however to me, is an exception. I think it's great for anyone! It's one of my favorite movies, and Stephen Lang totally won me over, as a fan with his acting in this.