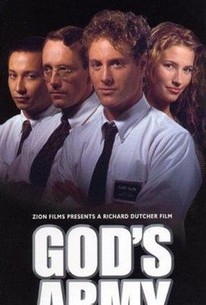 Richard Dutcher writes, produces, directs, and stars in this fish-out-of-water religious drama about Mormons pounding the streets of Hollywood, looking to save a couple of souls. A small town elder journeys to the big city and joins a missionary group led by the gruff Marcus Dalton (Dutcher). Together, they go door-to-door trying to convert people to their faith, Mormonism. Just when he's about to hang up his necktie and starched white shirt, he learns of the hardships that the others have endured -- Marcus has cancer, Banks, an African-American Mormon, was disowned by his family, and others have been harassed by nefarious anti-Mormon intellectuals. Soon, the young man learns that the first person he needs to convert is himself.

Matthew A. Brown
as Allen

God's Army warms my heart because it celebrates the humanity within each of us even as we are trying to live and love and learn.

There are several reasons a non-Mormon might want to see God's Army, and curiosity is not the least of these.

Richard Dutcher has fashioned an engaging film about a group of young Mormon missionaries trying bring in a harvest for the Lord.

God`s Army is one of the movies that bores me alot. I tried to watch the sequels and still not happy.

Cool church movie about what a missionary has to go through, and the amazing power of God along the way.