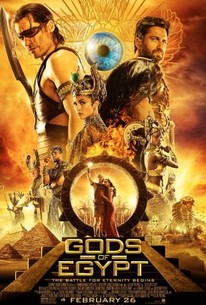 Critics Consensus: Look on Gods of Egypt, ye filmgoers, and despair! Nothing beside remains. Round the decay of this colossal wreck, boundless and bare. The lone and level sands stretch far away. (Apologies to Shelley.)

Critics Consensus: Look on Gods of Egypt, ye filmgoers, and despair! Nothing beside remains. Round the decay of this colossal wreck, boundless and bare. The lone and level sands stretch far away. (Apologies to Shelley.)

Critic Consensus: Look on Gods of Egypt, ye filmgoers, and despair! Nothing beside remains. Round the decay of this colossal wreck, boundless and bare. The lone and level sands stretch far away. (Apologies to Shelley.)

In this spectacular action-adventure inspired by the classic mythology of Egypt, the survival of mankind hangs in the balance as an unexpected mortal hero Bek [Brenton Thwaites] undertakes a thrilling journey to save the world and rescue his true love. In order to succeed, he must enlist the help of the powerful god Horus [Nikolaj Coster-Waldau] in an unlikely alliance against Set [Gerard Butler], the merciless god of darkness, who has usurped Egypt's throne, plunging the once peaceful and prosperous empire into chaos and conflict. As their breathtaking battle against Set and his henchmen takes them into the afterlife and across the heavens, both god and mortal must pass tests of courage and sacrifice if they hope to prevail in the epic final confrontation.

News & Interviews for Gods Of Egypt

View All Gods Of Egypt News

Critic Reviews for Gods Of Egypt

While not an outright disaster, this is still as massively perplexing a misfire as any likely to see a release this year.

ny picture featuring Geoffrey Rush channelling King Lear as the patriarch god Ra while flying about in a spaceship can't be all bad.

The fantasy film Gods of Egypt does practically everything wrong, from its whitewashed cast to its irredeemably goofy storyline. What a waste.

A raspy voiceover man (Lindsay Farris) announces authoratively that we are about to witness the story of the Egyptian gods... "From what I recall it goes something like this." What? Did he just say that?

The film doesn't just play fast and loose with mythology, it also besmirches the cinematic legacy that precedes it - chiefly, the inventive ancient Greek special effects creations of Ray Harryhausen.

Read the incredibly descriptive Wikipedia entry and call it a day.

When even the human characters are impervious to peril, there's never really any suspense.

We had very high expectations for it but then it awfully disappointed.

This is a badly rendered CGI wasteland that has no sense of fun or adventure, and wallows in its own mediocrity.

Gods of Egypt is the latest in a long line of insane, half-assed fantasy epics that leave audiences scratching their heads, jaws agape, wondering what the they just witnessed. Half tedious, half the best time I've ever had at the movies.

The posters were ugly, the trailers foreshadowed disaster, and... yes, the movie did not disappoint in being a train wreck. [Full review in Spanish]

Audience Reviews for Gods Of Egypt

A painfully bad mess of a tale. No wonder the gods were driven from Egypt long ago.

Gods of Egypt never really had a chance. The acting is awful, even seasoned actors Gerard Butler and Geoffrey Rush ham it up with incredibly cheesy performances. And the story is painfully predictable and formulaic. But the worst part is the atrociously bad CGI, which looks like something out of a video game. Some of the action scenes are entertaining, but Gods of Egypt is a total trainwreck.

A decent action adventure kiddie movie with not-a-lot going on with the script. Surprise! Let's just get to the sparkly CGI fight scenes, could we? Don't be so picky. "Can I get more not-butter for my popcorn? More cold sugar water, too, please. With ice. Thanks."