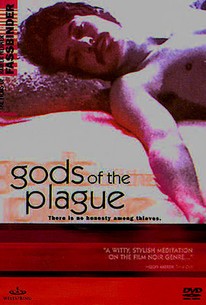 Gods of the Plague (Gotter der Pest) is one of several German films directed by Rainer Werner Fassbinder under his pseudonym of Franz Walsch. That's Fassbinder, however, playing the small role of a buyer of pornography. The main story involves a pair of two-bit hoods who spend most of the film one-upping each other with a brace of scheming females. Their dreary life of crime comes to a spectacular head in a shoot-out at a supermarket. ~ Hal Erickson, Rovi

Critic Reviews for Gods of the Plague (Gotter der Pest)

Gods Of The Plague is rich with pathos, treating these petty thieves and murderers as tragic figures.

The narrative is random and disposable, which means you'll have to settle for the allure of the film's many women.

Sequel-remake-anagram of Love Is Colder Than Death

This wallow in fatalism is a minor but memorable crime flick.

Audience Reviews for Gods of the Plague (Gotter der Pest)

Feels like Fassbinder is trying to remake Love is Colder Than Death, but he overdoes it.