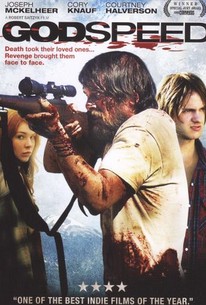 A man learns too well that one shouldn't promise more than he can actually deliver in this independent thriller. Charlie (Joseph McKelheer) lives in Alaska with his wife, Rebecca (Jessica Ward), and young son, James (Ben Loosli). Charlie makes a modest living as a preacher and faith healer, but he's come to question his faith, and tries to dull the pain of doubt with alcohol and affairs with other women. Charlie's life is turned upside down when Rebecca and James are brutally murdered; six months later, he's living in isolation in a trailer in the wilderness, having turned his back on his old life and given up on religion. Charlie receives an unexpected visitor in Sarah (Courtney Halverson), a lovely young woman who tells him her father is severely ill and could use his help. Against his better judgment, Charlie agrees to join Sarah for the long trip back to her family's home, but when they arrive, her brothers, Luke (Cory Knauf) and Tim (Hallock Beals), make it clear they have some unpleasant business with Charlie. Directed by Robert Saitzyk, Godspeed received its world premiere at the 2009 CineVegas Film Festival, where it received a prize for "Exceptional Artistic Achievement."

Lynn A. Freedman
as Belle

Jacob Moore
as Kid in Field

Lauren Worley
as Kid in Field

Desiree Massi
as Kid in Field

Simon Johnson
as Kid in Field

Kaylene Rihtarshich
as Kid in Field
View All

Despite its fissures in tone and technique, Godspeed occasionally plays like a sturdy indie outpost of revenge cinema.

This tautly wound and even more tightly paced mini-epic of love, loss, and redemption deep in the heart of God's country (aka Alaska) is nothing if not awe-inspiring.

Opens tentatively but ends confidently with a climax that's bloody enough to jolt but not enough to sicken -- a trick that too many directors have yet to master.

Earnest to a fault, this tale of vengeance and retribution strives for Faulknerian pathos, but never rises above amateur theatrics.

Saitzyk's sappy pontifications on loss, redemption, and zealotry don't register as headily as they're meant to, and the spirituality invoked feels about as sincere as the Christian who only attends Christmas mass.

Suggests Flannery O'Connor's Wise Blood but without the gallows humor or eye for regional detail.

The things one's faith and beliefs will make them do; finding justification in taking another's life.