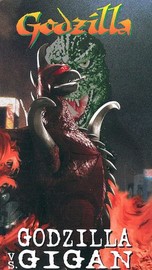 Graydon B
½ May 7, 2019
A pretty good Godzilla film, but its only worth it for Godzilla, Angurius battling Gigan and Ghidorah! Otherwise I really think its ok.

Mason M
May 7, 2019
This movie has some blood, and very long battle scenes. That makes me very happy!

Maineutral R
May 7, 2019
It's not the worst Godzilla film (hands down, that's got to be Godzilla's Revenge), but it's still a huge pile of dumped shit. The movie takes long before really get started, and when it does, it's a lackluster fest of stock-footage overdose and slow-stale fight scenes. The monster (Gigan) can look all the cool it wants, but when there's no correct execution, it simply doesn't work.

We have that uninteresting human story which should've disappear after the monsters arrived, but no, we see a lot of it. Not even Godzilla looks interesting anymore; you can even see that the rubber-suit is starting to fall apart. Stock footage is at hand, and takes a lot of the sequences, damn, will they ever stop? The movie has the biggest sin of a Godzilla movie: it's so boring that there's nothing, really nothing into it. It's an empty waste of time and half of your mind gets lost during the story, because there's just nothing to catch any attention here, it's just a bore, huge bore.

Since Son of Godzilla (except for Destroy All Monsters), this saga had shitty movie after shitty movie. My sad guess is that the rest of the movies in the Showa series are pure shit before the Heisei Series, which brought back Godzilla to a more appropriate affair. How sad, we're in Godzilla's darkest times.

Hayden L
May 7, 2019
A fantastic film that even rivals the first Godzilla film, with humor, action, aliens, and a great story, this is why I love Godzilla!

Griffin J
½ May 7, 2019
This is one of the most unbearable movies I have seen in my life. That is coming from a Godzilla fanboy by the way. The tone definitely isn't geared towards kids like some of the other crappy ones, but its weird. Completely gorey, boring, and unnecessary... aw well, at least Gigan himself is kinda cool.

Chris E
May 7, 2019
One of the oddest, but coolest Godzilla films ever made. It's wacky fun all around.

Anthony K
May 7, 2019
Trashy yeah! The old spikey turltle got back into it again as well helping Godzilla fight theevil cocroach people trying to bring peace to earth with their awful plan

Anthony K
May 7, 2019
Trashy yeah! The old spikey turltle got back into it again as well helping Godzilla fight theevil cocroach people trying to bring peace to earth with their awful plan

Nick C
May 7, 2019
This may or may not be responsible for my fear of cockroaches when I was four. Lots of reused footage and weird talking monsters. Also, randomly large amounts of blood coming out of Godzilla's arm. One of the weirder ones.

Jason P
½ May 7, 2019
great fights even if they use a liitle stock footage

Michael S
May 7, 2019
One of my favorite Godzilla films

David Z
½ May 7, 2019
Featuring the return of King Ghidorah, and his new tag team partner Gigan. Both who are under the control of evil space cockroaches that need a new planet to take over. So Godzilla and his tag team partner Anguirus team up to take them on. Fun for the over the top pro-wrestling inspired Kaiju battles, but is hurt by heavy use of old footage.

Kean F
½ May 7, 2019
another great godzilla film that i love very much, the team up fight was really good, i loved seeing godzilla and angirus fight gigan and ghidorah also i found it funny that the aliens overlords were roaches it made me laugh so much that i didnt really mind it

hunter b
May 7, 2019
This has to be my favorite GODZILLA movie because it was the first I ever saw. Yes, it is goofy at times but it is still really good. The introduction of Gigan and King Ghidorah is fantastic. If you're a big Godzilla fan (like me) then you will probably like this movie. GODZILLA vs GIGAN gets an 8 out of 10.

Andrew R
May 7, 2019
I adore the design of Gigan...he is one of my all time favourite monsters. I enjoy the plot, and have many great memories of this film. Yet I have not seen it in some time.
Page 1 of 10