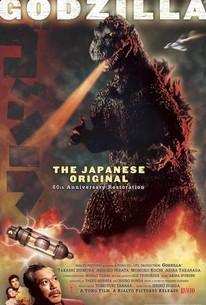 One of the longest-running series in film history began with Ishiro Honda's grim, black-and-white allegory for the devastation wrought on Japan by the atomic bomb. As his visual metaphor, Honda uses a 400-foot-tall mutant dinosaur called Gojira, awakened from the depths of the sea as a rampaging nuclear nightmare, complete with glowing dorsal fins and fiery, radioactive breath. Crushing ships, villages, and buildings in his wake, Gojira marches toward Tokyo, bringing all of the country's worst nightmares back until an evil more terrible bomb -- capable of sucking all the oxygen from the sea -- returns the monster to its watery grave. The original film is chilling, despite some rather unconvincing man-in-a-suit special effects, and brimming with explicitly stated anti-American sentiment. All of that was removed for the U.S. release directed by Terry Morse. It was replaced with bad dubbing and tedious added footage starring Raymond Burr. The resulting edit was just another monster movie, but was still popular enough to assure future Toho Studios monster films a wide American release.

Kenji Sahara
as Man aboard Ship

Haruo Nakajima
as Godzilla/Newspaperman
View All

...a portrait of a country less than a decade removed from the horrors of the atomic bomb, reckoning - in a movie that is still fun and thrilling - with that trauma.

It's a terse, lean terror with a big, swinging tail.

While the acting is hit-and-miss and the story jumps around somewhat confusingly, Honda's film is a one-of-a-kind experience all the way through, one that stands the test of time better than I had expected.

Clever storytelling manages to confront tragedy from any number of angles, and sometimes swinging at it from the side can be the most affecting.

Honda's satire is cutting, with several characters resigned to living with the threat of constant cataclysm.

Rarely has the open wound of widespread devastation been transposed to celluloid with greater visceral impact.

Despite the problems with pacing, effects and some characterizations, Godzilla (1954) does manage to work pretty well and thanks to its mix of social commentary and action, it delivers a satisfying adventure.

This is a monster film that more or less launched the entire kaiju genre, but it's also dark, sad, and downright tragic.

Sixty years later, Godzilla is still one of the baddest cats to grace a movie screen.

It's ultimately rather difficult to discern why Godzilla has amassed a reputation as a classic of the genre...

This is a movie about the devastation experienced in Japan during the war. It just happens to have a giant dino-monster in it.

The original Japanese classic before it was re-edited for the American audience is this fun catastrophe movie that offers a smart commentary on nuclear tests in a postwar era, showing a Tokyo devastated by a monster born as a consequence of the destructive actions of man.

With a score that will leaving you cheering, miniatures that will literally make your heart race into believing it is real, "Gojira" (Godzilla) is terrific for it's time. As the myth of Godzilla comes to life and they realize it is more than just a belief, the people of Japan must work together and discover a way to destroy Godzilla once and for all, as he tears down and burns every inch of Japan. The script of this film seems obvious to a fault, but the action makes up for every flaw or laughable edit. I can't complain much about this film, because back in 1954 there was only so much available budget-wise to make this a great film, and for it's time, it is a brilliant film. I loved every minute of this film, but it just needs a little more work on it's thinly written screenplay. "Gojira" (Godzilla) is a fantastic piece of classic cinematic history.

There ain't nothing like watching a guy in a rubber suit squashing cardboard buildings. But as silly as its special effects may be in 2014, Gojira is a timeless masterwork. The 650 foot monster is never portrayed as purely evil. Because it evolved out of misguided nuclear testing, the creature becomes a complex metaphor for the anxieties that plagued Japan in the wake of the H-bomb and World War 2. The film captures this in dark and honest fashion.

A pretty cool movie, and the start to the entire Godzilla franchise. So, if you like the movies, you really need to go back and watch this one. It's not the best creature movie of the 50s, but I liked it.