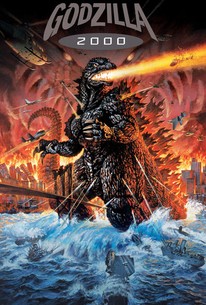 "Godzilla 2000" pits a 180 foot-high Godzilla against an alien life form aroused from its 6,000 year sleep in the depths of the Japan trench. Two hundred meters wide and shaped like a rock, the alien flies over the Japanese archipelago and attacks Godzilla, who has just crushed the entire city of Nemuro, Japan. Can Godzilla's furious heat beam destroy the gigantic UFO? Is this alien life form an enemy? Is there a future for the humans? The stage is set for an unprecedented battle between Godzilla, the UFO, and the Japanese citizens of Shinjuku.

Only a diehard fan of the long-running Japanese Godzilla series could love Godzilla 2000.

A couple of laughs at the expense of the intentionally horrible dubbing ... and amateurish acting.

Despite the millennial title, you're not going to see anything new here.

Better-suited to a Saturday matinee.

Godzilla 2000 ... is dubbed into English in a manner that's occasionally too jokey for its own good.

The movie is like a hammer blow to the head.

The final third is a giant monster version of a WWE match between the Big G and the alien upstart, with the pug ugly alien mutating on the move.

After all the humans' blathering about studying him or killing him or why's-he-keep-saving-us-after-we-created-him-but-now-try-to-destroy-him?, the big scaly brute's got the best idea for taking the piss out of this movie--keep roaring unintelligibly.

We know we're in for a good time right from the start when plucky photographer Yuki says, "I've really got to get some great pictures here," while moving her lips only twice.

Neither cheesy enough to make you laugh at it, nor good enough for you to enjoy it as a conventional action flick.

After the crap fest that was Roland Emmerich's remake of a classic icon, this is a return to form that not brings back the real Godzilla, but fixes the lacking elements of Godzilla vs. Space Godzilla. I thought that this one was the best Godzilla in years and definitely had a great plot, that was truly wonderful, awesome, entertaining from start to finish and above all memorable. Takao Okawara directs this stunning work of monster mayhem and adapts it to current times and maintaining what fans want out of a Godzilla film. This is a must see for fans and is entertaining from start to finish. The cast do a fine job as well and the plot is well constructed and certainly is engaging throughout. I would go as far to say that this is my favorite in the series since the original film. This is a fine monster film that definitely is a standout picture in the series and it is fun from start to finish and it is a well structured picture that is destined to certainly be a favorite amongst fans. The action is always thrilling and it elevates the franchise were the last entry left off. A good movie that is a must see for monster film fans and I would say that along with the original is a good starting point for newer fans. Despite its slight flaws, this is among the strongest films and one of the finest examples of monster films ever committed to film.

Everything the American adaptation should have been. It updates Godzilla for the modern age while still remaining faithful to what makes these movies so enjoyable. The visual style is still the same affair with Godzilla being a guy in a rubber suit and model cities being blown up. The Godzilla suit looks really good in this film. The film incorporates some use of modern day CGI which looks pretty bad. There is this one scene that shows a computer-generated Godzilla swimming under water and it looks like a video game cutscene. The plot is nothing special but it is enough to keep the viewers attention. Surprisingly, Godzilla gets to fight another monster in this film. This is surprising because usually Godzilla flies solo in reboots. The monster rumble is a great fight with one of the greatest Godzilla finishing moves of the franchise. The English dubbing is laughably bad but it almost adds to the film's cheesy fun factor. This Godzilla movie is delightfully cheesy fun with enjoyable action. Overall, Godzilla 2000 provided a breath of fresh air to fans that were disappointed by the Roland Emmerich film and kick-started the Millennium Godzilla series.

Not the best start to a new series of Godzilla movies, but it'll do. It did have some work to do after the shitstorm that was the American Godzilla. It mostly makes up for that. We get a guy in a suit, looking better than ever. The film also brings us some CGI, with a wonderfully dodgy looking spaceship. I praise this film for not holding back on its imagination. I wish people would stay away from the American dubs. I've never seen one, and I've enjoyed the series thoroughly. This film had everything I'd come to expect, but seemed scared of being too outlandish. Hiroshi Abe also ruined a lot of the movie by having ONE look. Was it fear? Was it determination? Was it confusion? I'll never know.

"Godzilla 2000" is not anything like the "Godzilla" movie that graced the theatres a few years ago and that most people hated. It's a lot more like the old Godzilla movies that were made decades ago such as "King Kong vs. Godzilla" and "Godzilla vs. The Sea Monster." Yep that's right, "Godzilla 2000" takes place in Tokyo Japan, it's dubbed in English, and Godzilla has that all-familiar cry, or voice, that he always had. This time around, Godzilla terrorizes the city of Tokyo while battling against a huge monster formed from rock that seems to be controlled by aliens. This rock monster has supposedly been resting for many many years, yet it's also very powerful and might be unstoppable....for people that is. If you like the old type of Godzilla movie where the whole movie centers around Godzilla battling against a huge and powerful nemesis, then you gotta see "Godzilla 2000." "Godzilla 2000" has great special effects, and it's one movie that doesn't need great acting in order to make it a good movie because Godzilla is the star, not the actors. NOTE: That was my Amazon review from the year 2001.