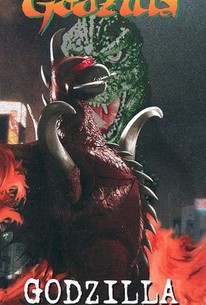 One of the cheapest entries in Toho's Godzilla franchise, this alternately noisy and talky entry finds yet another batch of goofy-looking insectoid aliens plotting to conquer humanity -- from their headquarters deep within a Godzilla theme park! -- using the double-team monster threat of Gigan (a metallic bird-creature with a handy table saw in his belly) and the three-headed Ghidorah. It is somehow apropos to the movie's comic-book premise that the nominal human "hero" is a washed-up cartoonist, who teams up with his equally-ineffectual pals (not counting his butt-kicking girlfriend). Eventually it is left to the Big G to square off against the extraterrestrial foes, with the occasional (but mainly inadequate) aid of Angilus for some tag-team wrestling action (which ranks among the silliest in Toho history). The paltry budget is also quite apparent this time out, as indicated by frequent use of recycled footage from previous monster films, particularly Destroy All Monsters. The film's only real highlight comes in the form of a plot twist which grants Godzilla his first speaking role. ~ Cavett Binion, Rovi

Toshiaki Nishizawa
as Kubota
View All

Critic Reviews for Godzilla vs. Gigan

Although Godzilla doesn't really cut it in the special effects department, he does have a certain lumbering charm. So does the script.

Among the most efficient and exciting of the series since the 1954 original.

The overall tone of Godzilla vs. Gigan skews a little more childish than usual. It has the same sugar-buzz 9-year-old-boy energy that makes the series so appealing, but it seems a little less focused.

This one takes awhile to get going, but as payoff you get Godzilla and Anguiras fighting new enemy Gigan and Ghidorah on one of the series' most unique battlefields: a Godzilla-themed amusement park.

For a film that's awfully busy and awfully manic, it turns out to be quite a dreadful slog.

A substantial improvement over its predecessor, Godzilla vs. the smog monster (1971), this twelfth Godzilla movie is typically silly but features a rousing, extended monster battle to save the Earth from evil aliens.

Audience Reviews for Godzilla vs. Gigan

I love the design of Gigan. He is a great monster and an awesome villain. But every scene witha human being will make you cringe.

Godzilla and a giant alien chicken. Great stuff. It's back to the very basic for Godzilla after many were disappointed by the previous effort (I loved it). It kind of throws away everything Godzilla started as. Now we have a fairly kid friendly film, in which aliens design an amusement park in the hopes of controlling some of the monsters from monster island. A manga artist uncovers this bizarre plot and soon the aliens release their own monster, Gigan. Fun fights and frolics abound, even if these movies are getting rather crowded.

Again the lacking entries continue with Godzilla vs. Gigan, this is a cheaply made movie that has everything wrong going for it. The film is a poorly constructed affair and it really is clear that the filmmakers are not even trying to make something fun for viewers. In terms of delivering the fights, they are lackluster and quite boring. By this point, the films were simply recycling old ideas and not even trying to create something truly entertaining for viewers to enjoy. IU really hated the film, and aside from the first few films in the series, the entries by this point in the series, was simply not worth your time and was too silly, ridiculous to actually enjoy. I know the films were silly in the past, but they had at least good storylines and good monsters for Godzilla to fight. Acting wise, the film suffers and with a lacking plot, it ends up failing. The director clearly didn't care for the series, and it shows. This is a mess that just doesn't do other films in the series justice. I really didn't enjoy the film and this is a painful one to watch. If you're looking for something fun, and entertaining, this isn't the Godzilla film to watch. The film lacks in everything that has made the previous outings fun, memorable and mindless entertainment. Don't expect anything original with this one, or avoid it altogether, you'll be glad you did. The series at this point was simply stuck in a rut, and didn't have anything worthwhile left to tell on-screen.

Another weird entry into the series. The plot is silly and a bit cliche for a Godzilla flick, in which aliens try to take over the world by controlling monsters. This monster mind control plot device has been used in three previous Godzilla flicks. The two monsters being controlled are King Ghidorah and a new monster named Gigan. Gigan is one of Godzilla's coolest looking enemies and has an interesting array of weapons. The plot may be silly, with a weird cast of characters, but their is some fun to be had because the film does not seem to take itself seriously. However, three flaws prevent this movie from being great. One flaw is it takes about 45 minutes before any decent amount of monster action gets started. Another flaw is the film's use of stock footage, which is used a lot during the monster battles. This brings the monster battles down a level because it makes the film look cheap and lazy. It is not as bad as "Godzilla vs. Megalon" or "Godzilla's Revenge" but it is a little disappointing to see the monster battles consist of stock footage. The visuals in this film are also sub-par. Their are scenes of Gigan and Ghidorah flying, and they look like stiff plastic models. The Godzilla suit shows obvious signs of wear and tear, pieces of the suit can easily be seen breaking off because the it was used in so many films. The Godzilla roar is also messed up, it sounds like it is being played from a broken stereo. The weirdest moment in the film is when Godzilla and Angilus are shown talking in these strange synthesized voices. They speak in the english version but the japanese version had them speak through comic book-like speech bubbles. It comes out of nowhere and it is never addressed in the film. Their is some fun to be had with this film, but its major flaws prevent it from being a good entry in the Godzilla franchise. This film is worth watching just to see Gigan and a hilariously over-the-top tag-team match with Godzilla and Angilus.