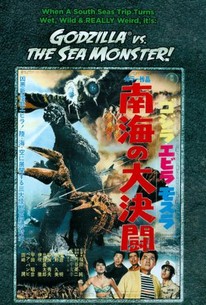 Godzilla vs. the Sea Monster (Ebirah, Horror of the Deep) Photos

The seventh film in Toho's Godzilla series (and the first without the direction of Inoshiro Honda), this colorful installment finds the natives of a volcanic island enslaved by the armies of an unnamed country claiming to be in control of a giant crustacean named Ebirah. A boatload of teens and a wanted criminal are washed ashore on the same island, where they encounter a large group of escaped slaves who hail from Mothra Island, home of another popular Toho monster. They pray to their moth-god to liberate them, oblivious to the fact that a certain green lizard is trapped beneath their cavern hideout. The teens soon discover this and release Godzilla from the rock with a well-placed lightning rod. Released and re-energized, Godzilla soon goes head-to-head with Ebirah, while Mothra eventually flaps into action to free the captives. Silly and cartoonish despite some more menacing elements, this is nevertheless one of the more interesting chapters in the Godzilla pantheon.

Jun Tazaki
as Base Commander

Hiroshi Sekita
as Ebirah
View All

Critic Reviews for Godzilla vs. the Sea Monster (Ebirah, Horror of the Deep)

A lot of people put this one on the low-end of the series, but I have fun with it.

Godzilla vs. the Sea Monster is... not so great. It feels small and trifling and, well, a bit dumb.

Exemplifies the peak of the Godzilla franchise's tonal shift into campy, fun territory, a phenomenon that reflected the series' absorption of 1960s Western pop-culture influences.

Tina Hassannia
Not Coming to a Theater Near You

A decent film at best, a flimsy and uninvolving film at worst, and a discouraging sign that the days of Godzilla as a serious, interesting threat were now officially dead and buried.

This is one of the silliest but also one of the more amusing Godzilla movies.

Any Godzilla movie that opens with a teenage go-go dance marathon can't be all bad.

Audience Reviews for Godzilla vs. the Sea Monster (Ebirah, Horror of the Deep)

This was obviously made because Toho wanted to discover new plot elements for their kaiju film formula, which was falling into something of a predictable rut (humans fight humans, humans fight monster, monster fights monster, sayonara). But simply limiting the amount of time the monsters appear on screen offers no improvement. "Sea Monster" is one of the weaker entries in the original Godzilla series. Much of the film is directed as light comedy, a mild satire on the James Bond films. Actually, the comedy works pretty well; it's never knee-slapping laugh-out-loud, but it finds and sustains a level of humor most viewers should find fairly easy to live with. The monsters here are almost tossed in for deus-ex-machina plot devices, saving the day at the last moment. To be sure, it's amusing to see Godzilla sit around pondering what to do with the woman he's just saved from bad guys, but there really isn't much for him to do here. He zaps a giant vulture, pulls the claws off a lobster and smashes a nuclear power plant - and that's about it. For a minute towards the end, it almost looks like things will get complicated by a battle between Godzilla and Mothra, but this doesn't really amount to much either. For Godzilla completists, it's a relatively harmless sub-par entry - it certainly doesn't scrape the same bottoms as "Godzilla's Revenge" or "vs. Megalon". But if you are not yet a Big G. fan, this should not be your introduction to the series. 3 Stars 4-8-14

Godzilla Vs the Sea Monster brings much awesome carnage to the screen in this series of eccentric, amusing and memorable monster films. As usual Godzilla is against a different type of monster and it is an enjoyable, entertaining film that boasts some good effects, a fairly interesting story and decent performances from its cast. The film, like every other in the series is imperfect and at times kit is silly, but nonetheless it is fun and entertaining due to its plot, which I thought was yet another effectively entertaining idea, despite the traditional formula that Godzilla films always go for. Fans will love this as much as previous entries and it is a fun little monster film that is worth watching if you're in the mood. Godzilla always is entertaining to watch as he battles his foes, and he proves that he is the king of monsters. I thought that the fight sequences between the two monsters were well done and it definitely was a well structured movie that managed to overcome it flaws due to good effects, a good plot and of course the carnage created by the two monsters. However there was plenty of room for improvement as well, and at times the film could have benefitted from a script rewrite just to make it better. The film doesn't cover new ground and it's similar to others, however fans will surely be pleased with this one nonetheless. The series at times point would continue on in a relaxed groove of having Godzilla face against other horrifying enemies. This would delight monster fans everywhere and it would be something would be quite familiar with viewers that have kept up with the series by this point. Nothing new here, but nonetheless an entertaining film that is worth checking out, just don't expect anything too original.

One of the more sub-par Godzilla entries. Their is some good camp value but Godzilla does not appear in the film until 40 minutes in. The movie is really slow in the beginning but it does pick up the more the movie progresses. Godzilla fights a giant crab named Ebirah and a giant condor. The two monsters are not that interesting and pretty uninspired. Godzilla's part was originally written for King Kong, which is shown in the scene where Godzilla is awaken by lightning and a weird sub-plot involving Godzilla being attracted to a human female. This movie maybe fun just for its camp value but you can literally skip this movie and you won't be missing much.

A man goes out looking for his missing brother and is joined by two of his friends, Along they way they meet up with a fugitive who joins them after they try to stea la boat he was hiding out in. During their search, they end up being attack by a giant sea creature named Ebirah who causes them to get shipwrecked on an isalnd run by a terrorist organization called Red Bamboo. Red Bamboo have enslaved the island's natives and use Ebirah as an enforcer of sorts as they go about doing nefarious things. Along the way, the 4 travelers and the native prisoners find Godzilla and try to use him to help defeat Red Bamboo. It's a ridiculous plot, and it's all pretty silly, but hey, this is a monster movie, not high art. Besides Ebirah and Godzilla, Mothra makes an appearance, as does some unnamed condor who shows up and pesters Godzilla. I just love how on the dvd case there's a label declaring "Godzilla fights in a war against terror!" It adds to the fun camp value of things, even though this isn't really that good or interesting of a movie. This movie is a little slow, and a tad boring even, but it does pick up and get better as it moves along. I just wish there would have been less stuff with the humans and more stuff with the monsters. This movie does have it's moments, and if you want a few laughs it does the job, but overall, you could skip this and you wouldn't regret it.

Godzilla vs. the Sea Monster (Ebirah, Horror of the Deep) Quotes