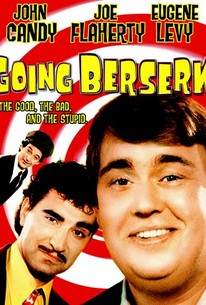 In this comedy, a stuffy congressman is dismayed when he discovers that his beloved daughter intends to marry limousine driver John Bourgignon (John Candy). While intending to put on a good show for his father-in-law to be, John is captured by some political opponents of the congressman. His capturers attempt to brainwash him into assassinating the congressmen, but things don't go exactly as planned. ~ Iotis Erlewine, Rovi

Tino Insana
as Outside Biker

Archie Lang
as Man with Bag

There are no critic reviews yet for Going Berserk. Keep checking Rotten Tomatoes for updates!

Dull and formulaic, Going Berserk is an underwhelming comedy that's poorly made. The story follows a limo driver that is brain washed by a religious cult to become an assassin, but things don't go exactly as planned. The cast features some impressive comedic talent, such as John Candy, Eugene Levy, and Ernie Hudson, but they're poorly used. The story is also particularly bad; it just doesn't go anywhere and nothing pays off. Going Berserk is a pointless and uninspired film that only delivers occasional laughs.

Not that great of a movie, especially for John Candy.