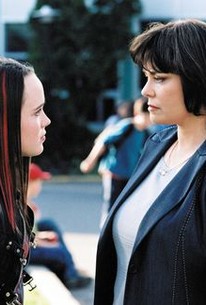 Laura (Delta Burke), a successful businesswoman with two children, thinks she has it all when she weds Jim Bancroft (Gerald McRaney), likewise a single parent, and moves from Florida to Reno, NV, to launch a fabulous new job as head of fundraising for the Children's Chronic Illness Association. Out on the town one evening, Laura decides to give a video poker game a try, then steps "upward" to slot machines. It isn't long before she has become hopelessly addicted to gambling, draining her family's bank account dry and even stealing from her kids and stepchildren. The bottom comes when, to feed her insatiable gambling habit, Laura embezzles 100,000 dollars from the charity which employs her. Based on a true story, this made-for-cable drama not only chronicles Laura's fall from grace, but also charts her ultimate triumph over her inner demons -- but not before a suicide attempt and the near-loss of everything she holds dear. Going for Broke first aired July 14, 2003, on the Lifetime network.

Critic Reviews for Going for Broke

There are no critic reviews yet for Going for Broke. Keep checking Rotten Tomatoes for updates!

There are no featured reviews for Going for Broke at this time.