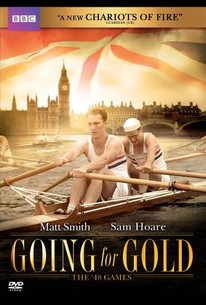 Matt Smith (Doctor Who) and Sam Hoare (Captain America) star in the powerful and uplifting story of an unlikely pair of athletes competing together against all odds in an Olympic games that almost didn't even happen. The fact that the 1948 Olympic games took place at all was miraculous in a London that was still devastated from World War II. Going for Gold - The '48 Games follows the compelling journey to the Olympic final of boatbuilder's son Bert Bushnell (Smith) and Oxford-educated Richard "Dickie" Burnell (Hoare). Thrown together as double sculling partners just six weeks before the games, they had to overcome vast differences in their backgrounds to become a world class rowing team on an International Olympic stage. With compelling supporting performances from James Frain (True Blood) and Geoffrey Palmer (As Time Goes By), Going for Gold - The '48 Games is an inspiring tale worthy of an Olympic gold medal. -- (C) BBC

Critic Reviews for Going for Gold

There are no critic reviews yet for Going for Gold. Keep checking Rotten Tomatoes for updates!

Audience Reviews for Going for Gold

Before the 1948 London Olympics, Jack Beresford(James Frain), the English sculling coach, informs Bert Bushnel(Matt Smith) that he has made the team. However, it is not as a single, as Bert has always competed and prefers, but as a double paired with Dickie Burnell(Sam Hoare), who he is not familiar with, with Burnell's father(Geoffrey Palmer) looking closely on. With Bert, a possible distraction arises in the normally comforting presence of his fiancee, Margaret(Sara Vickers). Meanwhile, the organizers are worried about the possibility of not being able to carry off the whole undertaking without asking for help. Based on a true story, "Going for Gold" is an engaging reenactment of an historic event that succeeeds through understatement, especially that of the finely tuned performances. The movie works on both a macro and a micro level, with the struggles of the competitors mirroring those of the government officials. What stands out most about the film is the level of detail from a time when Great Britain was rapidly changing after the war and trying to find a new place in the world.