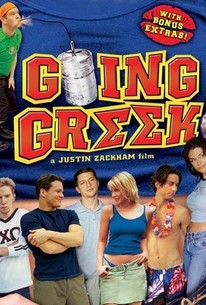 A shy freshman doesn't take long to warm up to fraternity life in this college comedy following in the tradition of Animal House and PCU. Reserved college freshman Jake Taylor (Dylan Bruno) isn't big on fraternities, but when the hardest-partying frat on campus refuses to admit his socially awkward cousin Gil (Dublin James) unless Jake pledges with him, the two are soon on their way to the wild life. When all-night benders and naked scavenger hunts begin to take their toll on Jake's grades and his fraternity-hating girlfriend, Paige (Laura Harris), begins to become suspicious of his decidedly frat-like behavior, the newly converted Greek must enlist the aid of his brothers to ensure that his scholarship isn't revoked and his girl doesn't leave him in the dust.

Scott A. Viscomi
as Stagen

There are no critic reviews yet for Going Greek. Keep checking Rotten Tomatoes for updates!

There are no featured audience reviews yet. Click the link below to see what others say about Going Greek!