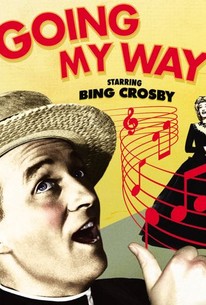 Critics Consensus: Bing Crosby and Barry Fitzgerald are eminently likable, and film is pleasantly sentimental, but Going My Way suffers from a surplus of sweetness.

Critics Consensus: Bing Crosby and Barry Fitzgerald are eminently likable, and film is pleasantly sentimental, but Going My Way suffers from a surplus of sweetness.

Critic Consensus: Bing Crosby and Barry Fitzgerald are eminently likable, and film is pleasantly sentimental, but Going My Way suffers from a surplus of sweetness.

It took some doing to persuade the staunchly Catholic Bing Crosby to play a happy-go-lucky priest in Going My Way; luckily he acquiesced, winning an Academy Award in the process. Crosby is cast as Father Chuck O'Malley, newly arrived at rundown, heavily in debt St. Dominic's Church. Father Fitzgibbon (Barry Fitzgerald), the cranky, set-in-his-ways curate of St. Dominic's, is none too pleased with O'Malley's breezy, "modernistic" methods. Fitzgibbon is content to adhere to the policies he has followed for nearly 45 years. Without overtly challenging Fitzgibbon's authority (he likes the old buzzard, and the feeling is mutual), O'Malley sets about to win the confidence of the local street toughs, organizing the boys into an angelic church choir. He also forestalls the plans of St. Dominic's mortgage holder Ted Haines (Gene Lockhart) to evict Fitzgibbons by arranging a fundraising choir tour, to be headlined by O'Malley's childhood friend, opera star Genevieve Linden (Rise Stevens). When he's not coming to the rescue of St. Dominic's, O'Malley is smoothing the path of romance for Haines' son (James Brown) and orphaned Carol James (Jean Heather), and arranging for a reunion between Fitzgibbons and his nonagenarian Irish mother. There is sentiment by the bucketful in Going My Way, but director Leo McCarey sagaciously tempers the treacle with moments of genuine hilarity and several delightful (and seemingly spontaneous) musical interludes. In addition to Crosby, Oscars went to Barry Fitzgerald, Leo McCarey, screenwriters Frank Butler and Frank Cavett, and Burke and Van Heusen's song hit "Swingin' On a Star." Bing Crosby repeated his father O'Malley characterization in McCarey's 1945 sequel The Bells of St. Mary's. ~ Hal Erickson, Rovi

Martin Garralaga
as Zuniga
View All

Critic Reviews for Going My Way

It is a slice of life, illuminated by those flashes of rich detail by which McCarey so often makes beauty out of the commonplace.

Paramount may have made a more appealing, more tenderly human and amusing picture than "Going My Way," during its many years of film-making, but if so, I have missed it.

It offers, in the performance of nutcracker-faced, 56-year-old Barry Fitzgerald, the finest, funniest and most touching portrayal of old age that has yet reached the screen.

Major thread of gaiety runs through the proceedings, and McCarey has liberally sprinkled sparkling individual episodes along the way for cinch audience reaction.

Go anywhere to avoid it.

As the film focuses on resolutions for all the characters after the primary contention, it becomes evident that the finale carries on far too long.

For most of its length, however, Going My Way is comedy -- the very best kind of comedy, which springs from an intelligent and encompassing love of its theme.

Every other blue moon a picture comes along that sends the most ulcerous and dyspeptic moviegoer dancing and singing into the street. Such a screen drama is Going My Way.

The film is excellent in every way -- acting, production, and evangelical outlook.

Audience Reviews for Going My Way

Der Bingle burbles bubbly as a bouncy and hip priest sent in to Hail Mary a losing parish. Barry Fitzgerald plays the cantankerous older curmudgeon already running things, unaware that time has passed him by. There's nary a sermon in hearing, but plenty of singing to solve whatever problems that might show up in this lighthearted romp that gave the befuddled audiences of the day exactly the assurance they must've needed in the face of the burgeoning youth demographic. Not bad.

Alright, so yeah, this film is very old fashioned, schmaltzy, sentimental, and even a tad corny perhaps, but you know what? I don't care. It's entertaining, well meaning, pretty good, and really hard not to like. We need stuff like this once in a while. The story concerns a young and easy going priest named Chuck O'Malley who is assigned to St. Dominic's: a church on the brink of going under. He doesn't get along with the head priest Father Fitzgibbon, but when the effects of O'Malley's attempts to bring the community together are felt, things do begin to change for the better. This is a nice little film, and it did spawn a sequel: The Bells of St. Mary's. That one's a lot like this one, with a similar plot and premise, but it is here where Crosby originated the character, and won an Oscar for his efforts. He really does put in some nice work, and he, like the character, is just really hard to dislike. He's just so damn charming and irresistable I can't stand it. Barry Fitzgerald is also quite good as Fitzgibbon. and Rise Stevens and Frank McHugh are decent as childhood friends of O'Malley's. All in all, this may be a pretty light and predictable film, but it's a harmless film with a lot of heart and a good message. It also looks good, and the singing is top notch too. Give this one a go. It may not be worthy of all of the Oscars it won, but it's hardly a forgettable piece of dreck.

An unconventional priest works to reform a failing parish. I'm a big fan of Bing Crosby's voice; so easy and melodic, he makes it seem as though anyone can sing like him, which of course no one can. But this isn't a musical. It isn't a drama or comedy either. If anything, it's two hours of the most saccharine nonsense I've seen. At the heart of this diabetic's nightmare is Crosby's character, Father O'Malley, who is flawless. His character is never put up for question, and his methods, ideals, mannerisms, or personality remain thoroughly unchallenged by other characters, the film's circumstances, or any subjectivity. He is just there in an untarnished and idolized unreality. The film's problems, such as they are, seem no match for O'Malley, and we see him easily navigate the church's financial troubles, a woman who's run away from home, and an old flame who serendipitously re-enters his life. And when the film ends on another sweet note, I felt like I had just seen a slice of life that was so watered down with religious idealism that it bore no resemblance to anything I've seen living. Overall, there's nothing memorable about Going My Way except for the few moments when we get to hear Crosby sing, but for that you can buy the soundtrack and save yourself two hours.

Crosby plays a young cool priest who helps out the community and the parish. A really nice movie, I couldn't help but like it.