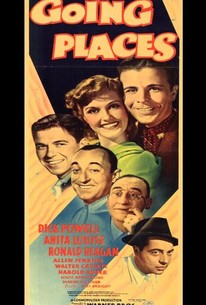 Louis Armstrong steals the show as the groom to Jeepers Creepers, a skittish racehorse that can only settle down and run when Armstrong croons him the horse's namesake song. The main story concerns a plucky, ingenious salesman, who needing business, poses as a steeplechase jockey and endears himself to a prominent stable owner and his lovely niece. Romantic sparks fly between the girl and the sly fellow and his ruse works well until he is assigned to ride Jeepers Creepers, in the big race. The trouble is, the salesman doesn't know how to ride. On the day of the big race, the horse is extra nervous until Armstrong and a full band ride up beside him and begin performing. The horse then runs like the champ he is, insuring that the salesman gets his girl. Sure, it's a lot of horsefeathers, but who watches these old musicals for the plot? The story was filmed twice before as Hottentot and Polo Joe. Look for Ronald Reagan in a minor role as the stable owner's playboy son.

John Harron
as Guest
View All

There are no critic reviews yet for Going Places. Keep checking Rotten Tomatoes for updates!

There are no featured reviews for Going Places at this time.