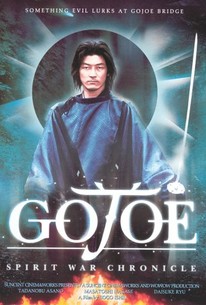 Maverick Japanese director Sogo Ishii takes an unexpectedly conventional approach in this screen adaptation of a well-known Japanese folk legend of the 12th century. In the long-standing battle of the Genji and Heiki clans, the Heiki have emerged triumphant, but they find they have a new adversary in Shanao (Tadanobu Asano), a demon who each night lays waste to the Heiki warriors near the Gojoe Bridge in Kyoto. Retired warrior Monk Benkei (Daisuke Ryu) learns of his wrath, and after capturing the sword of the Demon Slayer, journeys to Kyoto to do battle with Shanao. But Benkei learns that Shanao isn't a demon after all -- he is one of the last surviving Genji, who has taken on the garb of a demon in a final bid to defeat his sworn enemies and restore the honor of his family. A box-office success in Japan, Gojo Reisen Ki was first shown in North America as part of the 2000 Toronto Film Festival.

Eclipsing its violent battles with haunting metaphysics, Gojoe is a Japanese period piece like no other. Bleak, apocalyptic and demonically intense, it is a film to watch at the end of the world.

A serious dose of gruesome medieval Japanese warrior action with more beheadings than you can shake a samurai sword at. At times the action may cause confusion which is the point as warriors try and figure out who or what is ambushing. There's also a real sense of style in filmmaking here. It looks beautiful with some mind blowing cinematography mixed with CG effects in the way they should be. Mythology, demonology and Tadanobu Asano add to the mystique.

If supernatural samurai movies is your thing, I highly recommend this.