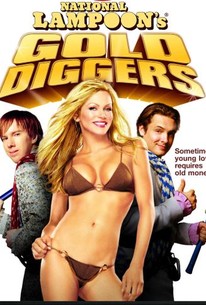 Critics Consensus: It aspires to Farrelly-level offensiveness, but the PG-13 rating and a dearth of decent gags renders Gold Diggers tame, toothless, and dull.

Critics Consensus: It aspires to Farrelly-level offensiveness, but the PG-13 rating and a dearth of decent gags renders Gold Diggers tame, toothless, and dull.

Critic Consensus: It aspires to Farrelly-level offensiveness, but the PG-13 rating and a dearth of decent gags renders Gold Diggers tame, toothless, and dull.

American independent filmmaker Gary Preisler makes his film debut as a writer/director with the black comedy National Lampoon's Gold Diggers. Twentysomethings Calvin Menhoffer (Will Friedle) and Leonard Smallwood (Chris Owen) get arrested for the robbery of two sixtysomething women, Doris (Louise Lasser) and Betty (Renee Taylor). The ladies decide to drop the charges and invite the crooks to their space-age mod Beverly Hills mansion. Cal and Lenny come up with a plan to marry the women for their money in hopes that they die within the year. It turns out that Doris and Betty are actually broke and they're planning to marry the boys, kill them, and cash in on their insurance money. After several unsuccessful murder attempts, all four characters end up robbing Doris and Betty's rich uncle. Originally titled Lady Killers but changed to avoid confusion with the Coen brothers' remake of the classic 1955 film, Gold Diggers was shown at the 2003 CineVegas Film Festival.

Will Friedle
as Calvin Menhoffer

Mary Albee
as Woman on Street

By turns pointless and pointlessly mean-spirited.

The single punch line that sparks genuine laughter comes three minutes into the film; after that, these marriages are made in comedy hell.

Nothing's quite so painful as failed comedy, and this atrocity is equivalent to a compound fracture.

This is the spectacularly inept directing debut of writer-producer Gary Priesler, who is said to have 12 other movies in development. God help us.

So stupefyingly hideous that after watching it, you'll need to bathe in 10 gallons of disinfectant, get a full-body scrub and shampoo with vinegar to remove the scummy residue that remains.

Truly this is one of the most off-putting, unpleasant and earth-shatteringly unfunny "comedies" I've ever seen.

If you watch this movie, you are an idiot

Taking a trip to the retirement village and clipping grandma's toenails might be more pleasant that watching this film.

Gold Diggers was like watching 1 of those way over the top wacky 80's comedys.I can't believe I'm saying this but I actually enjoyed it

What is the point of this story?