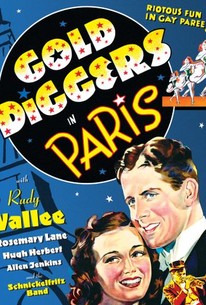 The last and least of Warner Bros.' Gold Diggers musicals, Gold Diggers in Paris at least has the novelty of a Gallic setting. The stars this time are Rudy Vallee, Rosemary Lane, and Warners musical perennial Hugh Herbert. There aren't really any "gold diggers" (i.e. young ladies on the prowl for rich husbands), merely a troupe of stranded nightclub chorines whom Vallee passes off as a ballet troupe in order to win an international prize. Busby Berkeley's choreography is far from his best, especially since he's dealing with real dancers this time instead of geometrically arranged nonmoving bodies. The one song of note is "The Latin Quarter," later put to excellent use in countless Bugs Bunny and Pepe Le Pew cartoons.

There are no critic reviews yet for Gold Diggers in Paris. Keep checking Rotten Tomatoes for updates!

There are no featured audience reviews yet. Click the link below to see what others say about Gold Diggers in Paris!