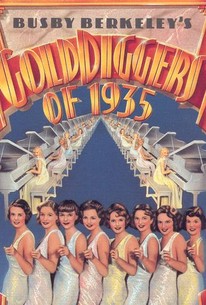 As a reward for services rendered as a choreographer, Busby Berkeley was promoted to the director's chair for Gold Diggers of 1935. The pedestrian storyline concerns a fancy New England hotel, where the underpaid staff is totally dependent on tips. Desk clerk Dick Curtis (Dick Powell), a medical student with a gift for singing, falls in love with Amy Prentiss (Gloria Stuart), daughter of tight-fisted guest Mathilda Prentiss (Alice Brady), whose prodigal, much-married son Humboldt (Frank McHugh) threatens to bankrupt the family. Flamboyant Russian impresario Nikolai Nicoleff (Adolphe Menjou) curries favor with Mrs. Prentiss to finance his next Broadway show; meanwhile, eccentric snuff-box collector T. Mosely Thorpe (Hugh Herbert), whom snobbish Mrs. Prentiss hopes will wed her daughter, weaves in and out of the story, closely followed by gold-digging Betty Hawes (Glenda Farrell). None of this matters in the slightest: Gold Diggers of 1935 is memorable not because of its sappy plotline, but because of its Oscar-winning musical highlight "Lullaby of Broadway," which may well be the chef d'ouevre of Berkeley's career. To reveal too much of the story-within-a-story of "Lullaby of Broadway" (wherein madcap socialite Wini Shaw literally dances herself to death) would spoil it for the uninitiated: Be assured, however, that once seen, this spectacular setpiece can never be forgotten.

Critic Reviews for Gold Diggers of 1935

There is a sort of plot and while it has its rougher moments... the general effect is just dreamy and lunatic. In fact, rather like a quiet evening at home with a bottle of paregoric.

The airiness of this film is the result of hard, focused work... It's not high art, but it's about as impressively disciplined as filmmaking craftsmanship can get.

If Gold Diggers of 1935 wasn't quite up to its predecessor, it's probably the fault of the newly enforced Production Code.

This second musical in the Gold Diggers series is vastly entertaining due to Busby Berkeley's production numbers, including the Oscar-winning song Lullaby of Broadway.

For the most part a smashing spectacle.

Audience Reviews for Gold Diggers of 1935

Not as good as the trifecta of Busby Berkeley (that would be Gold Diggers, Footlight Parade, and 42nd Street), but it's worth watching for the obligatory big musical number at the end. Victor Moore can be quite charming when he wants to be.

Like most of these films it's pinned to a silly plot about a skinflint millionairess, a scene stealing Alice Brady, and various people who surround and try to make a couple of bucks off her. The real star here is the musical numbers brilliantly staged by Busby Berkeley, the justly famous Lullaby of Broadway is both fantastic and chilling.

Somewhat better than I expected. This isn't just a song and elaborate dance musical, which was what I expected, but it's got a funny story about a mother who is trying to marry off her daughter to this rich guy, who's a bit crazy actually, but she falls in love with another guy while they're on vacation or something. Oh, and the cast they list on here isn't right, this movie does star Dick Powell, but also it stars: Adolphe Menjou, Gloria Stuart, Alice Brady, Hugh Herbert, and Glenda Farrell.