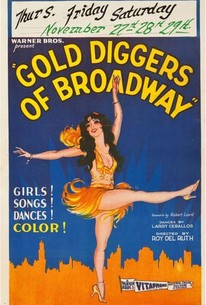 Previously filmed in 1923, Avery Hopwood's 1920 comedy The Gold Diggers was resurrected in 1929 as the Technicolor musical Gold Diggers of Broadway. Nancy Welford, Winnie Lightner and Ann Pennington stars as Jerry, Mable and Ann, three chorus girls who try to entice a wealthy backer to put his money in their cash-poor Broadway show. Stuffy Stephen Lee (Conway Tearle) shows up to rescue his brother Wally (William Bakewell) from the heroine's clutches, only to succumb to the girls' charms himself. According to contemporary reviews, the show was stolen by Winnie Lightner as the brassiest of the three gold-diggers, and by crooner Nick Lucas, performing his signature tune Tiptoe Through the Tulips. The other big number from the film, Painting the Clouds with Sunshine, served as the title for the 1951 remake of Gold Diggers of Broadway, which in the interim had been filmed as the more famous Gold Diggers of 1933.

Louise Beavers
as Sadie the Maid

Nick Lucas
as Nick
View All

It is a production which everyone should see, for it represents the latest word in the fast-moving progress of the new show world of the screen and provides the most lavish, beautiful and satisfying entertainment the screen has yet offered.

All in all, this makes merry talkie-singie-dancie fare and the beauty of its color again reaches pictorial splendor.

Ann Pennington's dancing. Lilyan Tashman's "English" drawl. Miss Foster's rather winning, sweetness, and Gertrude Short's occasionally amusing comments are other facets of interest in a picture that Is light and diverting.

It is filmed entirely In technicolor, and the picture has a vivid reality and charm which a plain black and white photoplay does not possess.

If you really want to pack up your troubles in your old kit bag and smile, smile, smile, The Gold Diggers of Broadway stands ready to help you do it.

Winnie Lightner as Mable is the hit of the show with her excellent voice, her gags and her forgotten monologue that is a comedy classic.

It seems remote and artificial, without the saving grace of formality and its laughter belongs to a type which, like that of "The Coconuts" and "Rio Rita" leaves me unfired.

Gold Diggers of Broadway lacks the human quality that On With the Show had, and the acting is stilted, except for that of Albert Gran, Lilyan Tashman and Conway Tearle.

Gold Diggers of Broadway is set off by some of the most gorgeous stage trappings that have been seen in these parts for a long time, and it is these settings which give the picture a certain visual beauty.

The musical score is well above the average of other revusical talkies to date and we have no hesitancy in predicting that "Painting the Clouds with Sunshine," and "Tiptoe Through the Tulips" will soon be among the country's major radio evils.

Ann Pennington, the same as ever, dances a bit, and talks a bit, and lends the prestige of her presence

Gold Diggers of Broadway has enough plot to keep it interesting. It has good, fast action, excellent comedy and musical numbers that are tuneful enough to justify all the technicolored spectacle used in presenting them.

There are no featured reviews for Gold Diggers of Broadway at this time.