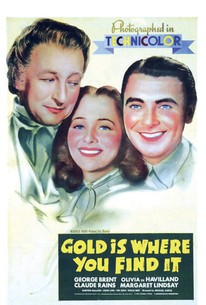 Gold Is Where You Find It Photos

Michael Curtiz directs this Technicolor Western based on the familiar story by Clements Ripley about the rivalry between farmers and miners in the Sacramento valley during the years following the California Gold Rush. Handsome engineer Jared Whitney (George Brent) from the Golden Moon mining company arrives in a small town to supervise their operations. He oversees boorish mining foreman Slag Minton (Burton MacLane), then goes to bar where he befriends Lance (Tim Holt), the son of prominent wheat farmer Colonel Chris Ferris (Claude Rains). He ends up falling in love with Lance's sister, Serena (Olivia deHavilland), despite their alliances with opposing forces. They are forbidden to see each other when her father finds out, so Jared goes back to San Francisco to work with his boss, Harrison McCooey (Sidney Toler), on a dam construction project. Meanwhile, Lance chooses the side of the miners over the farmers when he leaves the town to stay with his Uncle Ralph (John Litel). When local farmer John McKenzie (Russell Simpson) loses his family and his farm due to the destruction caused by the miners, Chris supports him in a law suit against the mining company. This all escalates into a violent armed confrontation between the farmers and the miners, leading up to an explosive conclusion and a romantic reunion.

Eric Wilton
as Butler
View All

Critic Reviews for Gold Is Where You Find It

The picture is given brisk direction and moves swiftly to its sure-fire climax.

It's a vigorous and exciting film which manages to present a great deal of technical and historical detail without crippling the narrative. The technicolor isn't just gorgeous here - it's sharp and firm and well balanced.

It's jam but good jam-with a few better moments you don't often find in films like this, and Mr. Claude Rains, as the farmers' leader, is chiefly responsible for these.

Michael Curtiz directs a Western that is almost of epic proportions.

Audience Reviews for Gold Is Where You Find It

There are no featured audience reviews yet. Click the link below to see what others say about Gold Is Where You Find It!

Gold Is Where You Find It Quotes