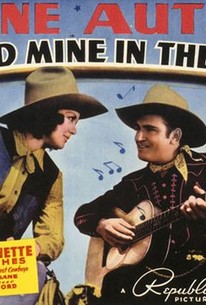 Gold Mine in the Sky Photos

In this musical western, ranch owner "Lucky" Langham (Robert Homans) dies unexpectedly, and in his will he leaves his spread to his daughter Cody (Carol Hughes). However, "Lucky" added the proviso that ranch foreman Gene (Gene Autry) is to be the executor of his will, and must give his OK before Cody can marry. Larry Cummings (Craig Reynolds) is a man from the city with eyes for Cody and her ranch; Gene has a feeling that Larry isn't to be trusted, and refuses to allow them to wed. Gene turns out to be a shrewd judge of character when Larry involves Cody in a kidnapping, and Gene (who is also drawn to Cody's charms) must come to the rescue. As usual, Smiley Burnette co-stars as Gene's sidekick Frog, and Gene warbles five songs of the sagebrush.

Art Dillard
as Cowhand
View All

Critic Reviews for Gold Mine in the Sky

Goofy contemporary western that mixes Chicago hoods as rustlers riding in sedans with real Wyoming cowboys on horseback chasing them in a dude ranch setting.

There are no featured reviews for Gold Mine in the Sky at this time.

Gold Mine in the Sky Quotes