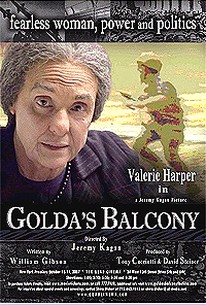 Inspired by the record-breaking Broadway hit that sold out for 15 straight months in New York City before being voted Best Touring Play of 2006, Tony award-winning playwright William Gibson's reflection on the life of Israeli Prime Minister Golda Meir stars Valerie Harper as one of the most important female politicians of the 20th century.

The brink of annihilation looks like a low-budget music video.

Golda's Balcony makes one yearn for Ingrid Bergman's portrayal of Meir in the 1982 TV biopic A Woman Called Golda.

We chart the growth of a woman and a country at the same time, a tough assignment that Harper tackles with humor and passion (even if her Kissinger impersonation could use a little work).

The big question is whether Harper's one-woman film creates a memorable character out of a woman with whom many audiences will be very familiar. The answer has to be no.

Fortunately, no amount of optical wizardry and quick-change trickery can disguise the fundamental power of Harper's performance, a revelatory turn that's transformative in every sense of the term.

Though, for today's movie-going audience, Golda's Balcony may have limited appeal, it's a moving and vital story with many satisfying moments.

A good performance of a landmark Broadway play will barely be enough to bring audiences to this one. But the history alone is worth the price of admission.

Not only is this poignant portrait of Golda Meir riveting and powerful, it also reminds and enlightens us about the origins of the current Middle East conflict.

This shamelessly uncritical view of Golda, her world perspective, and the period of Middle Eastern history over which she presided as a major player, confuses the protagonist's point of view with the reality. Grandmother or godfather?

There are no featured reviews for Golda's Balcony at this time.