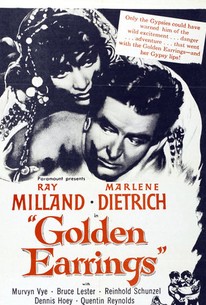 Based on a novel by Yolanda Foldes, this confusing romantic adventure concerns a love affair and international espionage. Told in flashback, British officer Ralph Denistoun (Ray Milland) recounts the story to American journalist Quentin Reynolds. Before WWII, British Intelligence officers Ralph and Richard (Bruce Lester) were held captive by Nazis who wanted to know about Prof. Otto Krosigk's (Reinhold Schunzel) secret formula. Ralph and Richard escape, deciding to look for Krosigk separately with the plan to meet up again in Stuttgart. Then Ralph meets gypsy woman Lydia (Marlene Dietrich) in the forest. She disguises him, gives him golden earrings to wear, and leads him through the forest. Ralph eventually fights the gypsy leader Zoltan (Murvyn Vye) and wins his respect. He joins the band of gypsies and heads to Stuttgart where he meets Richard and reads the horrible fate in his palm. He then meets Krosigk, who gives him the secret formula. He is then able to escape, but promises to return for Lydia. The story ends with Lydia and Ralph meeting again in the forest after the war is over.

Quentin Reynolds
as Himself

Jack Worth
as Nazi Party Official

Peter Seal
as Chief of Police

The general whimsicality of the picture is weary but Miss Dietrich does what she can with the laborious charade.

The great Marlene has a blast with the role, as if she's super aware she's miscast. The script is cheese, so she refuses to take it too seriously, camping it up at every turn and taking control of each situation.

There are no featured audience reviews yet. Click the link below to see what others say about Golden Earrings!