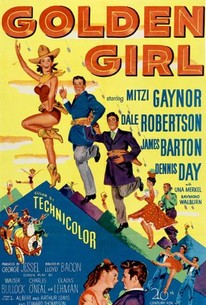 Golden Girl is the life story (sort of) of legendary 19th-century American entertainer Lotta Crabtree. The daughter of a luckless gambler (James Barton), young Lotta (Mitzi Gaynor) supports herself and her dad by singing and dancing in mining camps during the California Gold Rush of 1849. She carries on her activities into Indian territory, where she saves her scalp by winning over her Native American audiences. During the Civil War, Lotta falls in love with a dashing Confederate spy (Dale Robertson), with whom she is briefly reunited in San Francisco before his inevitable demise. The finale is one of those "smiling through the tears" contrivances that always worked so well in musical films. Golden Girl was produced for 20th Century-Fox by entertainer George Jessel. ~ Hal Erickson, Rovi

Luther Crockett
as Man in Box

Golden Girl purports to be the life of Lotta Crabtree, stage star of early California. Any resemblance must be coincidental, because the film is the usual backstage yarn, rather than history.

There are no featured reviews for Golden Girl at this time.