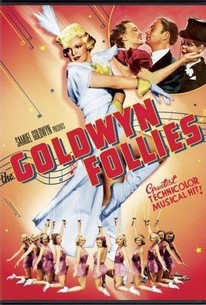 A longtime admirer of Broadway impresario Flo Ziegfeld, Hollywood producer Sam Goldwyn hoped to emulate the success of The Ziegfeld Follies by producing an annual movie-musical revue. Goldwyn's dream began and ended with 1938's Goldwyn Follies, a film centering on Goldwyn-like movie producer Oliver Martin (Adolphe Menjou). It seems that Martin's films haven't been turning a profit lately, and he wants to find out why by eliciting the advice of the average filmgoer. He makes the acquaintance of pretty Hazel Dawes (Andrea Leeds), who tells Martin that the movies suffer from unbelievable storylines, cliched dialogue and wooden acting. Impressed, Martin hires Hazel as "Miss Humanity," allowing her to judge the merits of his latest production and even to select the cast members. Among Hazel's discoveries are singing hash-slinger Danny Beecher (Kenny Baker), opera diva Leona Jerome (Helen Jepson), and prima ballerina Olga Samara (Vera Zorina). Also hoping to appear in Martin's upcoming epic are ventriloquist Edgar Bergan and his wisecracking dummy Charlie McCarthy, and a trio of zany animal trainers who look, sound and act like the Ritz Brothers.

American Ballet of the Metrop. Opera

Critic Reviews for The Goldwyn Follies

All this might have been excellent fun. and incidentally good satire, if only the scenes of the play itself had been anything but even more ineffectual than the play within the play.

A musical pretense that's meant to satisfy the average joes.

Audience Reviews for The Goldwyn Follies

There are no featured audience reviews yet. Click the link below to see what others say about The Goldwyn Follies!