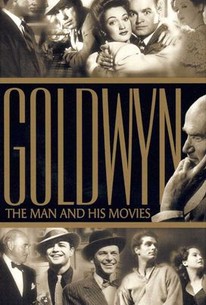 This documentary, produced for PBS's American Masters series, is based on A. Scott Berg's well-received biography of Samuel L. Goldwyn (1882-1974), Hollywood's first and likely still greatest independent producer. (Berg cowrote the screenplay.) Like many Hollywood pioneers, Goldwyn was born in Europe in modest circumstances, began his professional life in America in another business (selling gloves), and then fell into motion pictures, in Goldwyn's case, just as production was moving to the West Coast. His first film, with partner Jessie L. Lasky, was The Squaw Man, directed by Cecil B. DeMille and shot on location in the newly minted community of Hollywood. Goldwyn's career was slow getting started, but he hit his stride in the sound era, with literary adaptations of Sinclair Lewis's Arrowsmith and Dodsworth, Lillian Hellman's These Three and The Little Foxes (which Goldwyn, famous for slips of speech, always referred to as The Three Little Foxes), Sidney Kingsley's Dead End, and Emily Bronte's Wuthering Heights. He also made the first two screen versions of the venerable weepie, Stella Dallas, produced Eddie Cantor's big foray into film, Whoopee, and made the iconic baseball biography, Pride of the Yankees. Goldwyn finally reached the pinnacle of movie success in 1946 with The Best Years of Our Lives, which brought him his first Oscar for Best Picture. His postwar career arc was largely downward; two big musicals, Guys and Dolls and especially Porgy and Bess, failed to capture the public attention in spite of lavish production values and big-name casts. The newly filmed interviews, mostly with the surviving members of the Goldwyn family, including his son Sam Goldwyn, Jr., his daughter from his first marriage, Ruth Capps, and his actor grandson Tony Goldwyn, offer insights into Goldwyn the man, while excerpts from vintage interviews with Bette Davis, William Wyler, John Huston, Rouben Mamoulian, Lillian Hellman, Danny Kaye, Dana Andrews, Merle Oberon, and Laurence Olivier (doing a hilarious impression of Goldwyn) offer glimpses into his working persona.

Critic Reviews for Goldwyn: The Man and His Movies

It may not push the envelope when it comes to style or technique, but Goldwyn is an engaging look at a true mogul and the cinematic era he helped define.

There are no featured reviews for Goldwyn: The Man and His Movies at this time.

Goldwyn: The Man and His Movies Quotes