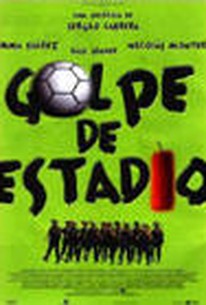 A nation teeters on the brink of civil war as most of its citizens are mesmerized by a championship soccer match in this comic thriller. The Colombian military, under the command of Sgt. Garcia (Cesar Mora), are guarding a oil tower, owned by an American refinery, from attack by insurgent guerilla forces (led by Emma Suarez and Nicolas Montero) as Garcia tries to negotiate a settlement. Meanwhile, most Colombians are busy watching the national team take on Paraguay in the 1994 World Cup qualifiers. As Colombia's team scores a goal, a helicopter pilot gets so excited that he loses control of his vehicle and crashes into the tower, and suddenly all hell breaks loose. ~ Mark Deming, Rovi

There are no critic reviews yet for Golpe de estadio(Time Out). Keep checking Rotten Tomatoes for updates!

There are no featured reviews for Golpe de estadio(Time Out) at this time.