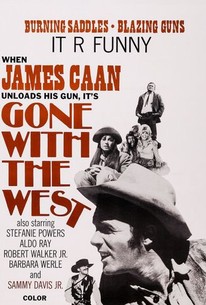 An all-star cast including James Caan, Stefanie Powers and Sammy Davis, Jr. headlines this shoestring-budget revisionist western from 1975. Caan stars as Jud McGraw, a cowboy unjustly framed for a crime he didn't commit; he partners up with an ethically wronged Native American woman named Little Moon (Powers). In response to the ills they have each suffered, the two set off to wreak vengeance on a small western town. Onetime Alfred Hitchcock Presents directorial mainstay Bernard Girard helms.

There are no critic reviews yet for Gone with the West (Little Moon and Jud McGraw) (Bronco Busters ). Keep checking Rotten Tomatoes for updates!

There are no featured audience reviews yet. Click the link below to see what others say about Gone with the West (Little Moon and Jud McGraw) (Bronco Busters )!