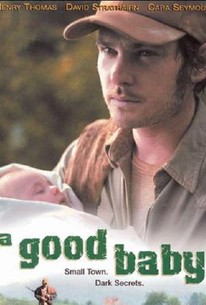 A small town's secrets prove deeper and more mysterious than they initially seemed in A Good Baby. Toker (played by Henry Thomas) is a young man living in a small North Carolina community, where he prefers to keep to himself. One day, while taking a walk in the woods, Toker finds a baby, and ventures into town to find out to whom it belongs. However, no one seems to know who the child's parents are, and no one will claim it as their own. Toker soon draws the attention of an attractive woman named Roby (Cara Seymour), who is interested in him, but will have nothing to do with the baby. Toker, however, has grown to love the child and does not want to turn it away. The arrival of a mysterious salesman (David Strathairn) eventually leads to the discovery of the child's true parentage. The directorial debut for Katherine Dieckmann, A Good Baby was screened at the 1999 Los Angeles Independent Film Festival.

Rhoda Griffis
as Mother in Shack

Neva Howell
as Woman at Mailboxes

Ralph Gates
as Man on Tractor

Bonnie Mackenzie
as Customer in Cal's

Critic Reviews for A Good Baby

Audience Reviews for A Good Baby

An interesting movie. Henry Thomas simply continues to amaze me.