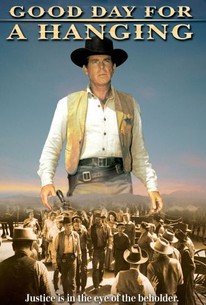 Good Day for a Hanging Photos

When the sheriff of a small western town is murdered, Ben Cutler (Fred MacMurray) puts on a badge and organizes a posse to bring in the killer, a personable young hotshot known as The Kid (Robert Vaughn). Upon bringing The Kid back to town, Ben prepares to oversee his execution, only to discover that the townsfolk are in sympathy with the murderer and don't much care if he is punished. The longer The Kid remains in jail, the locals grow more and more fond of the prisoner, and begin working up strategies to prevent his date with the gallows. Much to his surprise, Ben is accused of being a cruel and sadistic man, and the evidence he has against the Kid is ignored and discredited--even by Ben's own daughter Laurie (Joan Blackman). It will take something more than Ben's word to convince his neighbors that they're wrong and he's right, and that "something more" isn't long in coming.

Robert Vaughn
as The Kid

Critic Reviews for Good Day for a Hanging

There are no featured reviews for Good Day for a Hanging at this time.

Good Day for a Hanging Quotes